By Laura Elston
The priceless paintings which adorn the walls of the Buckingham Palace picture gallery have been removed for the first time in almost 45 years as part of the next phase of major renovations at the royal residence.

Conservators have spent the last month carefully emptying the 65 pieces of art from the state room, including works by Canaletto, Van Dyck, Vermeer and Rembrandt, in preparation.

A time-lapse video from the Royal Collection Trust shows the gallery covered in protective flooring as the art handlers used scaffolding towers and ladders to reach the historic paintings.

The picture gallery is one of the principal state rooms and provides the backdrop for state visits, receptions and official events hosted by the Queen and other members of the royal family.

Old Master paintings have hung in the room since it was first created for George IV in the 1820s.

The gallery’s almost 200-year-old roof will be replaced, and ageing pipes and wires removed.

Some of the other essential infrastructure has not been updated since the Second World War. 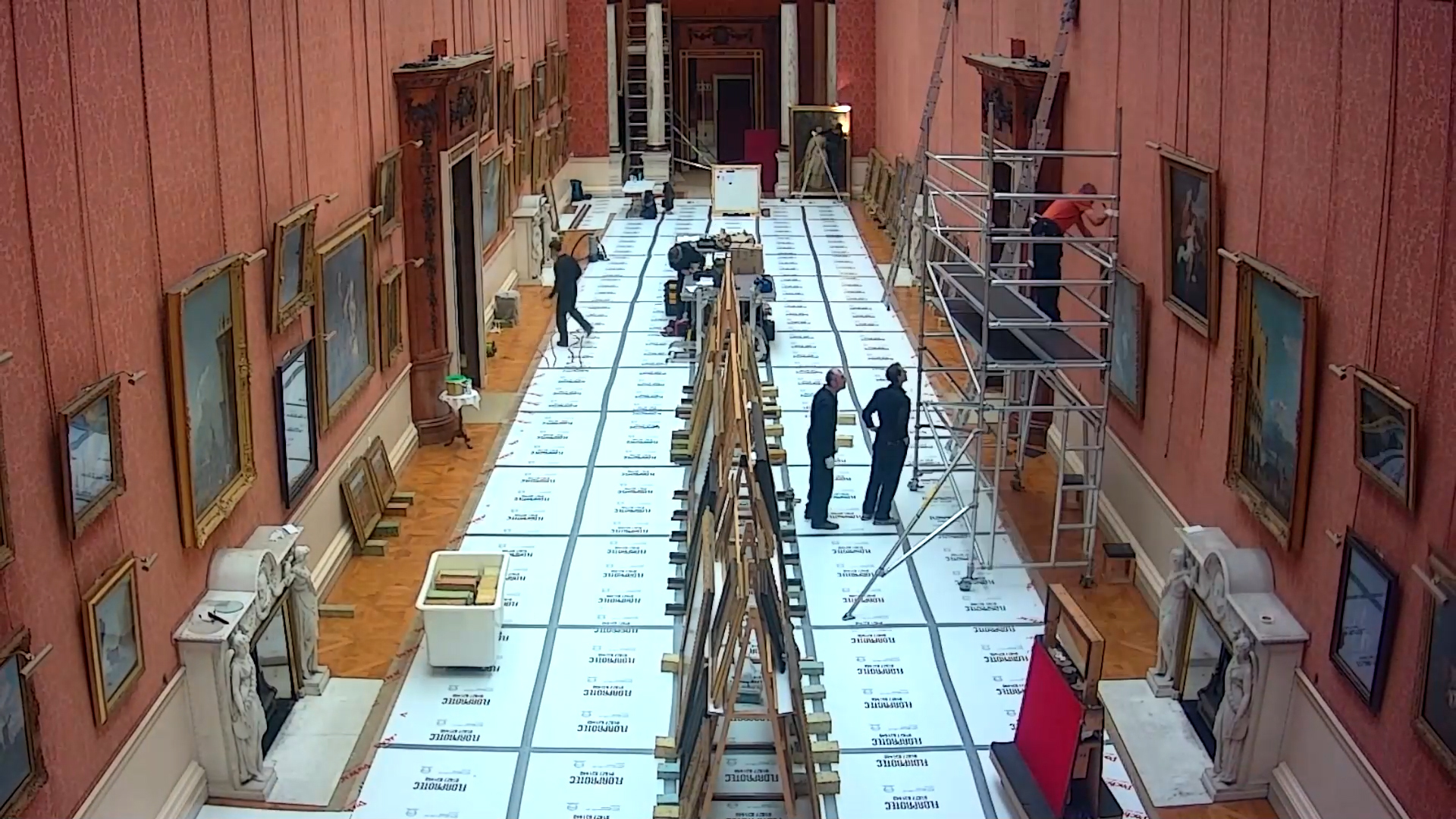 A new lift will also be installed to improve visitor access to the gallery.

The reservicing forms part of the 10-year programme of work to update the essential services in the building.

The paintings, considered to be some of the most important in the Royal Collection, will, meanwhile, be brought together in a gallery exhibition for the first time.

Among the highlights will be Rembrandt’s The Shipbuilder and His Wife, and Vermeer’s Lady at the Virginals with a Gentleman.

The removal of the artwork is the culmination of months of planning between the Reservicing Programme Management Office and the Royal Collection Trust.

While the display of paintings is occasionally refreshed, the gallery has not been entirely emptied of its contents since it was last redecorated in 1976.

It is where the Queen has hosted visitors such as US president Donald Trump, showing global leaders around special Royal Collection displays created in honour of their visits.

It also forms part of the visitor route for the summer opening of the state rooms in the palace’s West Wing, which attracts more than 500,000 visitors every year.

The cost of Buckingham Palace’s major renovations, which began in April 2017 and are due to be completed in 2027, is £369 million, and is being met by a temporary increase in the taxpayer-funded Sovereign Grant.
(PA)