The Gibraltar Parliament has unveiled a new electronic system of identification that will be used in tomorrow’s referendum on abortion.

The system will see voters scan their ID cards, in a new swift and simple system developed by the Parliament’s IT department.

With registration now closed 23,343 people, some will trial the new system when voting on June 24.

“We are trialling at this referendum a voter identification system for possible use further on in general elections etc,” Referendum Administrator, Paul Martinez told journalists.

“It is a method which hopefully would one; speed up the process of issuing a vote and two; make sure that there is no administrative error where a person is issued a vote twice and three; it does away again with the impersonation.”

“Where someone can come and impersonate someone else and ask for a vote.”

“It is quicker and a more secure way.”

He said the systems added benefit of people not being near the voting clerks helped with Covid-19 safety measures that have been introduced.

The machine will read expired ID cards and it is estimated that approximately 20 of those registered to vote will not have an ID card and will use another form of identification such as a passport instead.

“You will come to the voting station, you will be asked to deposit your ID card on top of the card reader you will see that the reader is flashing green and once it goes green it will retrieve the ID card details,” said Mr Martinez.

“It will also tell you where on the part register where you can be found, your voter number and your address. Also, it tells you if you go to the wrong polling station and will come out stating ‘Wrong voting error, this person votes at this station’.” 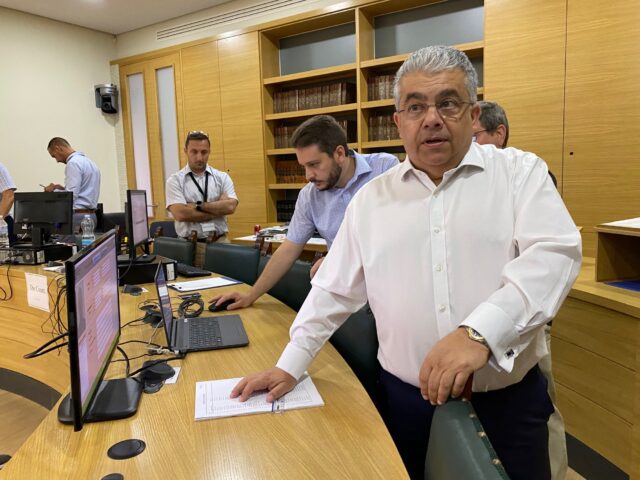 A manual search using information such as date of birth, address or electoral number can also be done.

“This is just an aid to the vote the part register will still be in use,” said Mr Martinez.

The system also detects someone who applied for a postal vote.

“If you have applied for a postal vote you can’t actually go and vote at the polling station because you have already been issued with a postal vote,” said Mr Martinez.

A person can hand in their postal vote up until 10pm on Thursday into any of the polling stations.

The system will also give information on the proxy voter that has been nominated.

Should a person wish to change their mind and want to vote themselves in person they can still do so as long as the proxy has not already cast the vote on that person’s behalf.

There will also be continuous updates throughout the day available of voter turnout. Mr Martinez estimates that this information will be updated every five minutes.

Govt brushes off Opposition’s ‘absurd and disingenuous’ view of GHA