Queen not consulted before Harry and Meghan's announcement to 'step back'

The Duke and Duchess of Sussex did not consult the Queen or the Prince of Wales about the contents of their bombshell statement saying they plan to "step back" as senior royals and divide their time between the UK and North America, it has emerged.

It is understood Harry and Meghan had just begun talks with the Queen and Charles about their future roles when they made their decision to go public.

The head of state and her son were only recently informed of the Sussexes intention to explore their public positions as members of the monarchy, and were not aware the statement was due to be issued.

The mood at Buckingham Palace is understood to be one of disappointment while the BBC has reported that senior royals have been "hurt" by the announcement.

The sequence of events is likely to lead commentators to speculate whether a rift has developed at the heart of the monarchy.

Harry and Meghan said in their ground-breaking personal statement they will work to become "financially independent", while continuing to "fully support" the Queen.

But Buckingham Palace warned the couple their decision to "step back" from the royal family will be "complicated".

A Palace spokeswoman said: "Discussions with the Duke and Duchess of Sussex are at an early stage.

"We understand their desire to take a different approach, but these are complicated issues that will take time to work through."

The Sussex's financial aims have been outlined on their official website which states the couple "...value the ability to earn a professional income, which in the current structure they are prohibited from doing. For this reason they have made the choice to become members of the royal family with financial independence."

Any future role which the couple take on for financial gain will have to be scrutinised to ensure they are not seen as profiteering from their position as members of the monarchy.

Royal commentators are likely to interpret the couple's decision - and the Jeffrey Epstein sex scandal that has engulfed the Duke of York - as a full-blown crisis for the monarchy.

Harry - one of the most popular members of the royal family with the public - and Andrew will now have a far lower public profile at a time of potentially great change for the country as Britain leaves the EU.

The couple's move follows weeks of speculation about their future after they took an extended break from royal duties over the festive period.

In an ITV documentary they spoke about the pressures they have been facing and family rifts, and in a separate move Harry issued a damning statement against the media accusing sections of the press of bullying his wife.

The couple said in their statement: "After many months of reflection and internal discussions, we have chosen to make a transition this year in starting to carve out a progressive new role within this institution.

"We intend to step back as 'senior' members of the royal family and work to become financially independent, while continuing to fully support Her Majesty the Queen.

"It is with your encouragement, particularly over the last few years, that we feel prepared to make this adjustment.

"We now plan to balance our time between the United Kingdom and North America, continuing to honour our duty to the Queen, the Commonwealth, and our patronages.

"This geographic balance will enable us to raise our son with an appreciation for the royal tradition into which he was born, while also providing our family with the space to focus on the next chapter, including the launch of our new charitable entity."

Graham Smith from the organisation Republic, which campaigns for an elected head of state, said about Harry and Meghan's decision: "This really is wanting to have your cake and eat it. They have said they will dip in and out of royal duties as it suits them but won't stop taking public money until they find other sources of income.

"To suggest that they're not already financially independent is incredibly crass and belies a sense of self-entitlement and a lack of self-awareness that is common among royals."

"What should be more concerning is that the royal family's star couple have effectively bowed out of their leading role, and that raises questions about the monarchy's future."

Harry and Meghan have only recently returned from their six-week break spent in the Canadian province of British Columbia with their eight-month-old son Archie.

Their first royal engagement of the new decade was to visit Canada's High Commission in central London to thank Canadians in person for the warmth of the welcome they received.

It is likely they will be spending their time in the Commonwealth country when not in the UK and may travel to America, Meghan's homeland and where her mother lives.

Any move to Canada, even for a period of the year, would throw up important questions about Meghan and Harry's long-term future within the royal family.

Meghan, a former actress, lived and worked in Toronto during her time starring in the popular US drama Suits, and the couple were famously pictured together when Meghan joined her then-boyfriend Harry at the 2017 Invictus Games in the city.

The cost of security for the couple would also be an issue, and as Canada is a realm, a country where the Queen is head of state, it may have to pay for keeping the couple and their son Archie safe.

The couple's aim to be "financially independent" may point towards them seeking a job, or a paid role with an organisation whose aims complement their own beliefs.

Other members of the monarchy who have salaried jobs include the Queen's grandchildren Princesses Beatrice and Eugenie and Peter Phillips, who all work.
(PA) 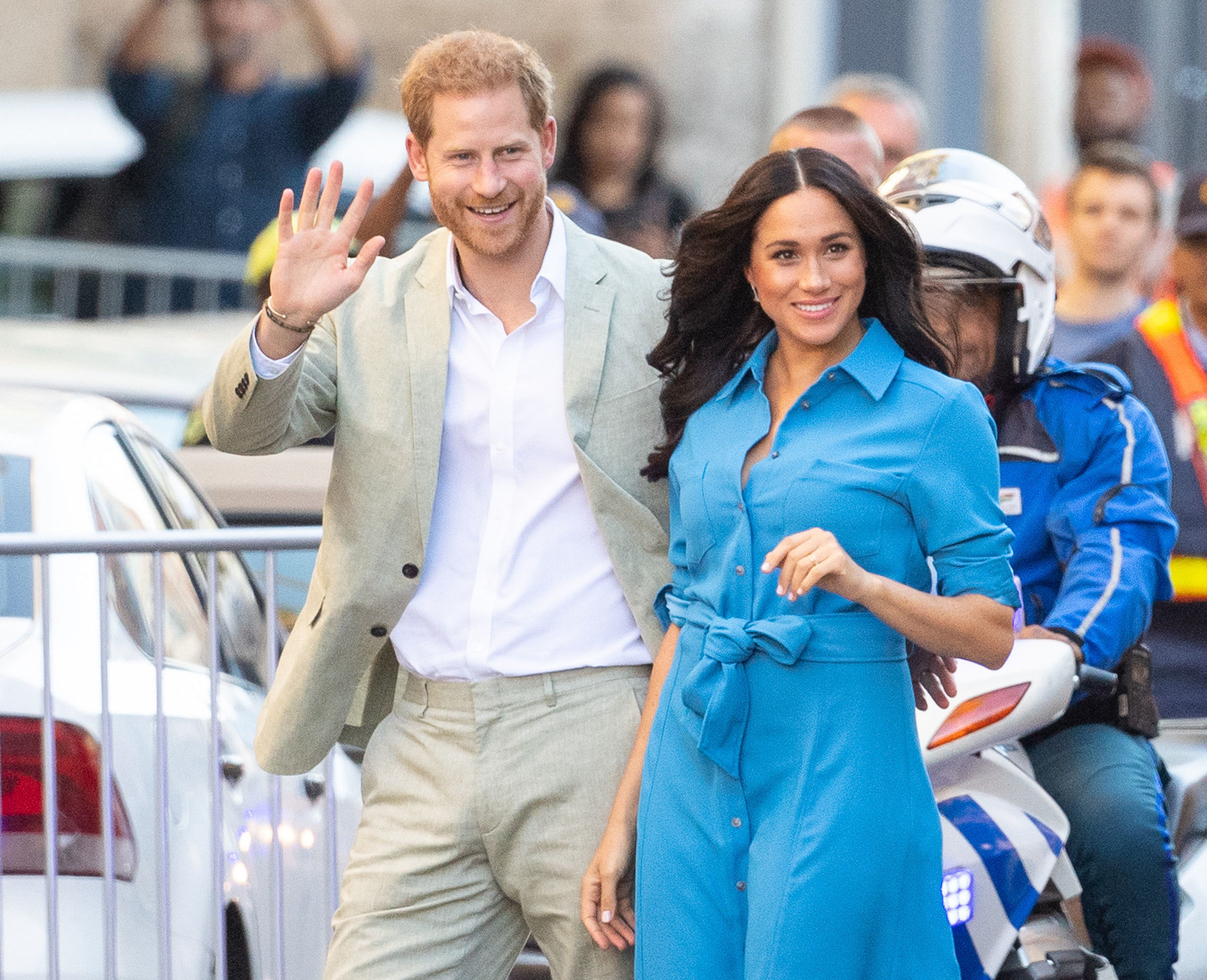 By Alex Green and Kerri-Ann Roper

A public relations expert has said the decision of the Duke and Duchess of Sussex to "step back" as senior royals was "as seismic" as the abdication of Edward VIII.

Harry and Meghan announced their shock decision in a statement on Wednesday night, adding that they will work to become "financially independent", while continuing to "fully support" the Queen.

The couple also announced that they plan to "balance our time between the United Kingdom and North America, continuing to honour our duty to the Queen, the Commonwealth, and our patronages".

PR expert Mark Borkowski, who has worked with Noel Edmonds and Graham Norton, told the PA news agency: "This is what was always going to be the case, I think.

"I think Meghan never quite understood what it was to be at the front and centre of the royal family, married to perhaps one of the most famous young royals, and, you know, really couldn't take the protocol and started to create the Sussex royal brand, very powerfully and linked very much to what they thought was important - mental health, many of the other charitable aspects.

"And gradually they were, and we saw that with the announcement of the birth of their child, they didn't play to royal protocol and they suffered the slings and arrows of all that, action from the media who clearly found it odd in the way that they were communicating the birth and communicating news on Instagram and not playing the game.

"I think what's actually happened is they've suffered a lot of negative PR. They want to do good and they've separated themselves."

Mr Borkowski suggested that the Sussex "brand" could rival that of the House of Windsor.

He added: "Harry loves Meghan and can see what she's going through and, influenced also by what he saw, what he experienced with his mother, he didn't want to see the woman he loves go through it.

"They've had their time to think about it and they're now separated totally from the royal family and we will now see the Sussex brand, you know, and we'll see something which is going to be a very powerful foundation or brand outside the royal family.

"And that's possibly the most dangerous thing for the royal brand. Could they become more potent? Could they have a world focus in a way the House of Windsor can't?"

Mr Borkowski said Meghan and Harry stand to make "a fortune" due to the demand for the Sussex brand in countries such as China, India and the US.

He said: "They are going to, they have to make a lot of money to fuel the lifestyle and everything that they need.

"It's not that easy to separate yourself, security issues alone are enormous, and they are a target for security - how they live, how they operate.

"I think around the world - China, America, South East Asia, India, parts of Europe - people will be falling over to get brand connections with them. They will make a fortune."

Following the announcement, a Buckingham Palace spokeswoman said in a statement that the palace understood "their desire to take a different approach" and added that "these are complicated issues that will take time to work through".
(PA)

Are you getting enough fibre? Here’s why it’s so important