Garry McBride of Monumental Icons with a bronze bust of Captain Sir Tom Moore, which has been commissioned by the Derbyshire firm and sculpted by Andrew Edwards in the hope it can be displayed at the headquarters of NHS Charities Together, the charity the centenarian raised money for.

By Matthew Cooper
A sculpture has been unveiled of Captain Sir Tom Moore – in tribute to his role as a “beacon of light” during the Covid-19 pandemic.

The bust of the Second World War veteran – complete with medals and the NHS fundraising hero’s trademark blazer – was commissioned by Garry McBride, of Derbyshire-based Monumental Icons.

Captain Sir Tom, who raised almost £33 million by walking laps of his Bedfordshire garden, is due to be knighted by the Queen in a personal open-air ceremony at Windsor Castle on Friday.

Explaining why he had decided to commission and pay for the bust, Mr McBride said: “When we were in lockdown, for the first time in my life, they said ‘You have got to stay at home and do nothing’.

“Every television programme you put on … there was Captain Tom, as he was then.

“As he progressed with his walk, he was more and more on the screens and so I just thought that for his achievements it would be really, really sad if, after five or 10 years, everyone had forgotten what he had actually done.” 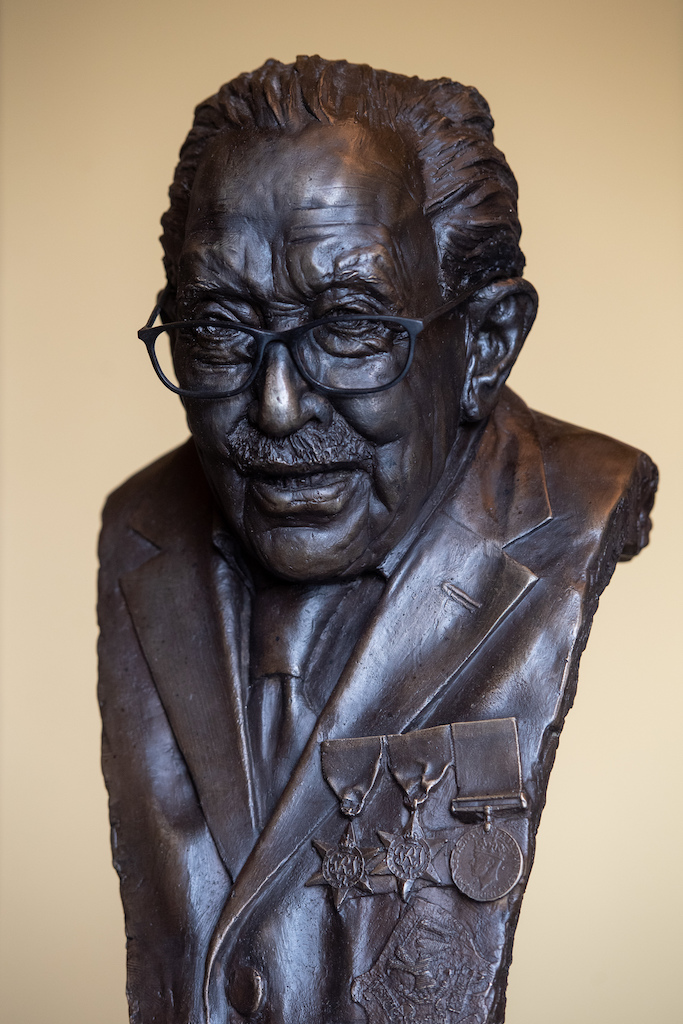 He added: “He became everyone’s champion and he was our beacon of light, so to speak, through our darkest hours.

“I was in a fortunate position, being in the monument and sculpture business, and my sculptor, Andy Edwards, he was locked down as well.

“So we found some clay, we worked on the photographs that were on Captain Sir Tom’s Facebook page and then we decided to make a bust.”

Mr McBride hopes the bust can be displayed at the headquarters of NHS Charities Together, the charity the centenarian raised money for.
(PA)