Chief Minister Fabian Picardo presents Foreign Secretary James Cleverly with a GFA shirt during a reception on the fringes of the Conservative Party conference in Birmingham on Sunday.

The Gibraltarians’ right to self-determination is “an absolute foundation stone” of the UK’s relationship with the Rock and its people, Foreign Secretary James Cleverly said on Sunday, as he expressed confidence that a beneficial UK/EU treaty was within grasp.

Mr Cleverly was speaking at a reception hosted by the Gibraltar Government on the fringes of the Conservative Party conference, which started in Birmingham on Sunday after a week of political and economic upheaval in the UK.

The latest poll on Sunday illustrated the scale of the challenge facing Ms Truss to assert her authority over the party she only assumed leadership of in September.

The survey by Opinium put Labour on 46%, 19 points clear of the Conservatives on 27%. On the issue of the economy, it found that a one-point lead for the Tories a week ago had become a 19-point advantage for Labour. 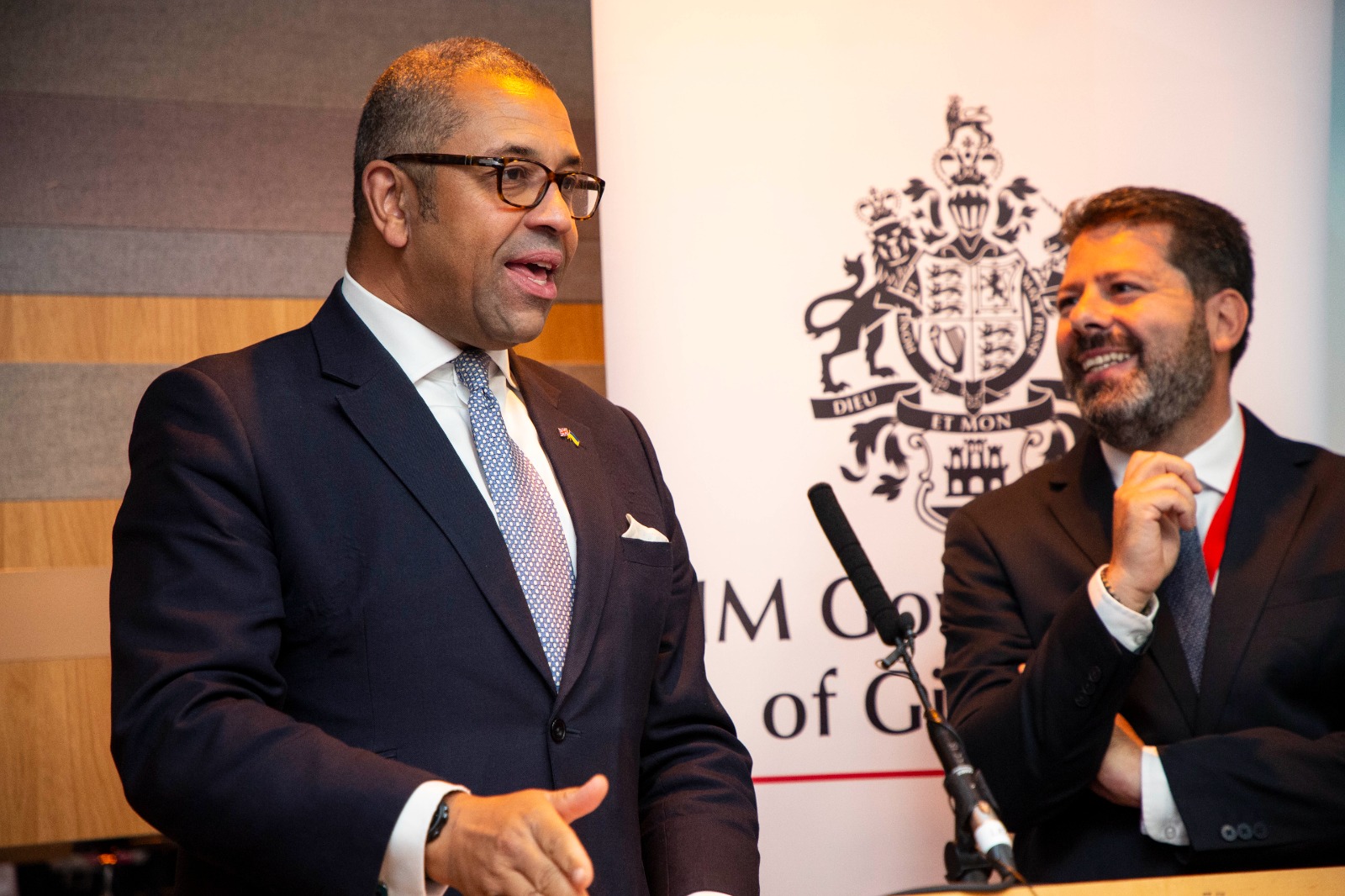 During speeches at the Gibraltar reception on Sunday night, there was no reference to the challenges facing the Conservatives.

As was perhaps to be expected, the focus was instead on positive messaging about the UK’s close relationship with Gibraltar and the ongoing treaty negotiations.

The soundbites from the Foreign Secretary were unsurprising but no less important for that.

Mr Cleverly said he would work to ensure Gibraltar had good relations not just with the UK but across Europe, enabling it to do business and trade and ensure the lives of Gibraltarians were “prosperous” and “convenient”.

“That's what we want to do,” he guests at the packed reception.

“But ultimately, we want to do so in a way completely in accordance with our foundation stone principle, a principle as solid as the Rock of Gibraltar itself, which is you choose your destiny, you don’t not have it forced upon you by anybody else.”

“And with that spirit at the heart of our negotiations, I have no doubt that we can make good and positive progress which will be beneficial to the UK, beneficial for Gibraltar, beneficial for Spain and the rest of the European Union.”

“That's what we're working towards.”

Mr Cleverly, who was presented by Chief Minister Fabian Picardo with a GFA shirt, reflected on the Rock’s “interwoven history” with the UK and recalled how its “geographic intimacy” had surprised him on his first visit.

"But what I realised is that the geographic intimacy of Gibraltar is matched by the huge sense of family," he said.

"And we are family, and that has really, really come across in the last few weeks." 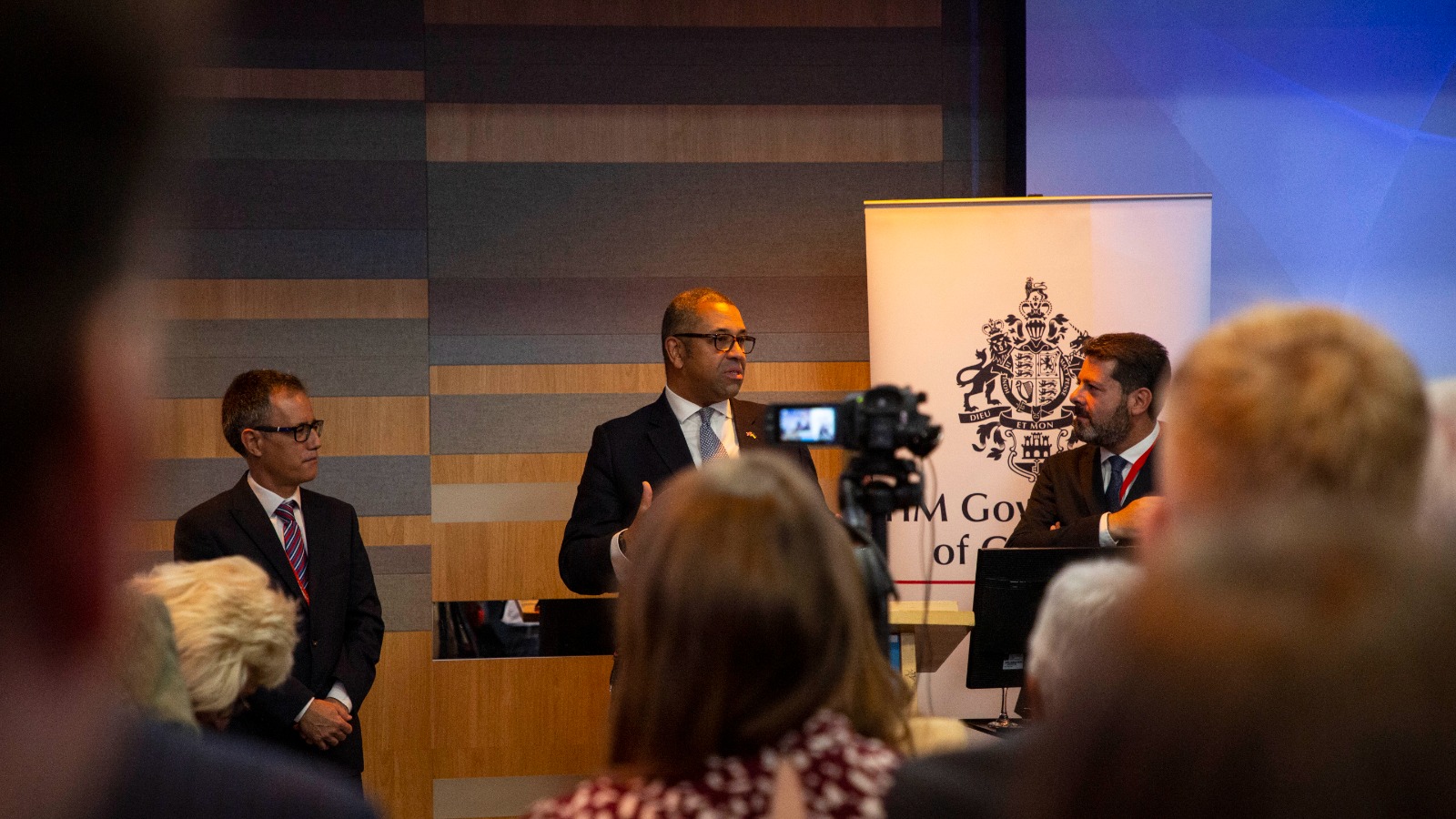 Earlier on Sunday evening, Mr Picardo had described Mr Cleverly as “a great friend of the Rock” and “an old hand” in the negotiations.

“Having worked with him for some time now since he became Minister for Europe, I can tell you he is exactly the man for the moment given the stage we are at,” Mr Picardo said.

The Chief Minister also thanked Ms Truss for her “commitment and readiness” to help in the treaty negotiations during her time as Foreign Secretary, something which he said would endure now that she is Prime Minister.

“She has made clear to me directly already that she remains ready to work with me to get this negotiation safely and securely over the line for Gibraltar,” Mr Picardo said.

He thanked too the UK Government for its support during the Covid-19 pandemic, both with the supply of vaccines and the sovereign guarantee for “long term pandemic debt”.

But like Mr Cleverly, the core of the Chief Minister’s speech was about self-determination and the treaty negotiations.

“I know you care as deeply as we do to ensure that everything we do is designed to keep us entirely, exclusively and enduringly British,” Mr Picardo said.

“I know that you will work with us to ensure that Brexit delivers dividends for us in a new UK/EU treaty on our future relationship with the EU.”

“And I know that, like every Gibraltarian, you will want to ensure that any such treaty is safe and secure for Gibraltar.”

“For I also know that we all agree that the future of Gibraltar can only be decided by the Gibraltarians.”