Netflix will release a new six-part miniseries on Friday, ‘The Queen’s Gambit.’ To borrow a one sentence outline: “In a 1950s orphanage, a young girl reveals an astonishing talent for chess and begins an unlikely journey to stardom while grappling with addiction.” The lead role of Beth Harmon is played by Anya Taylor-Joy; in one publicity shot she is standing in a shop, looking over her shoulder with a chess magazine open in her hands. On the racks behind are issues of ‘Time’ and ‘Newsweek’ with period covers.

Of ‘The Queen’s Gambit’, the novel on which the miniseries is based, I have two nearly identical paperback copies. Both were published in 1984 by Pan Books Ltd., and have the same number of pages (288), but the front and back covers have different quotes. Also, one copy is priced at £1.95 and the other at £2.50! The author, Walter Tevis, was 55 years old when the book first came out (just one year earlier), and lived in New York.

His first two novels, written many years before, had both been made into successful films: ‘The Hustler’ and ‘The Man Who Fell to Earth.’ For the former Tevis received $25,000 in rights. The trail to such riches began in 1953, when a short story of his, ‘The Best in the Country’, was accepted by Esquire magazine (Tevis’s first sale) for $350. On a visit to New York with his wife, Jamie, Tevis was more excited to meet his agent than to see the sights; over lunch this man suggested to Tevis that he expand his story into a novel. Back in Kentucky, where he and Jamie were raising two young children, Tevis set to work.

His novel came out in 1959; two years later there followed a much-praised film. In it, Paul Newman plays “Fast” Eddie Felson, who hustles pool. As a young man Tevis had stood around pool halls in Lexington, Kentucky and watched all-night games where stakes could be as high as $500. This is where ‘The Hustler’ came from.

For Walter Tevis chess, like pool, was “a tremendously exciting game.” From his youth he enjoyed playing and reading about chess, but felt no desire to join a proper chess club, explaining that his fear of making errors - “you take your finger off a piece and realise you have just thrown away your queen” - put him off.

The psychological pressure was daunting - “to me it’s one of the tensest games in the world” - yet while he wrote ‘The Queen’s Gambit’ he participated in a small tournament, even beating one or two of his opponents. In New York he also liked to visit The Game Room, open 24 hours a day, where every kind of board game could be played, and where “cigarette smoke curls through the beams of white light cast by overhead lamps.”

Stuart Morton, the manager, was a pal, and together they would play chess. Other times Tevis would happily play against his chess computer, bought at Macy’s (it cost, he says, between $150 and $200), with its blinking lights indicating which piece moved to which square. “My total winnings in a lifetime would be about $17”, is his answer to how good he is as a chess hustler; he does however concede that, on an intellectual level, chess is “a tempting substitute for writing fiction.”

There was a long hiatus in Tevis’s publishing career. He took a teaching position at Ohio University and found academic life there congenial. “He was pleased to be a faculty celebrity” writes Jamie, and “spent a good deal of departmental time reading students’ manuscripts” (which, however, he grew to tire of). Although he had time, he lacked discipline, and his own writing - after such a successful start - dried up.

The root of the problem can be stated in one word: alcohol. During an extended stay in Mexico (they drove all the way from Iowa, loading the car with “enough belongings to last a year”), while her husband finished ‘The Man Who Fell to Earth’ he also, says Jamie, “began his own serious drinking.”

The addiction did not cease when they got home. In ‘The Queen’s Gambit’ Beth Harmon starts to develop a drinking habit; she even drinks beer when visiting the Mexico City zoo! (Did Tevis do the same, I wonder?) It is here that she spots the World Champion, Vasily Borgov, “looking into the cage as though waiting for the gorilla to move a pawn.” In the following chapter, unable to sleep Beth gets up and starts playing over master games - while helping herself to cans of beer from the fridge. In ‘The Man Who Fell to Earth’ (David Bowie famously plays the lead role in the film) it is not difficult to find sentences like this one: “Newton walked over with two glasses - not wine-glasses but tumblers - and held them for him while he poured.”

In 1978 the writer who had for so long written nothing, returned to what his readers will feel was his true vocation, yet in so doing he left his wife, abandoned his teaching job at Ohio University, and moved to New York. Here he “rented a small apartment and devoted himself entirely to fiction.” His relationship with Eleanora, who in 1983 became his wife, is clearly part of the narrative; she worked as secretary to his new agent (‘The Queen’s Gambit’ is dedicated to her). When the novel came out, Tevis was asked about any chess books he might own. His reply, given with a note of resignation, was “I lost them all in my divorce, five years ago.”

The interview Walter Tevis gave to journalist Don Swaim in February, 1983 (his first, I believe, to promote ‘The Queen’s Gambit’) can be listened to online. Lots of the chat is to do with chess. “When I got involved in chess as a kid,” says Tevis, “I was afraid of girls, I was afraid of a lot of things, and chess was a way of getting rid of some of that anxiety by displacing it in something that was relatively safe.” He clearly enjoyed writing about his fictional female protagonist.

“I’m thinking of doing a sequel to this novel in which I will show her [Beth] at an older age...her personal life might get worse as her chess life dominates more and more.” Nothing however was to come of this, as in August, 1984, aged only 56, Walter Tevis died of lung cancer. Did he know how ill he was?

His first wife, Jamie, describes her husband as “a talented person who sometimes made use of his talents.” Always working on a typewriter, “he wrote fast and furiously, made few rewrites, and sold almost everything he wrote.” Tevis’s last work was ‘The Color of Money’, a sequel to ‘The Hustler.’ Paul Newman reprised his old role and this time won an Oscar.

The actor Heath Ledger apparently loved ‘The Queen’s Gambit’ so much that in 2007 he bought the rights to it. He planned to direct a film version, but his own death the following year meant the project did not get off the ground. As far as I know, the upcoming Netflix series is the first time the book will be portrayed on the screen.
Today’s puzzle shows an almost empty board! This position was composed by Vitaly Halberstadt, who co-wrote a book on chess endgames with Marcel Duchamp. It is White’s move. Can anything be done to save the game, or is it time to resign? The solution is below. 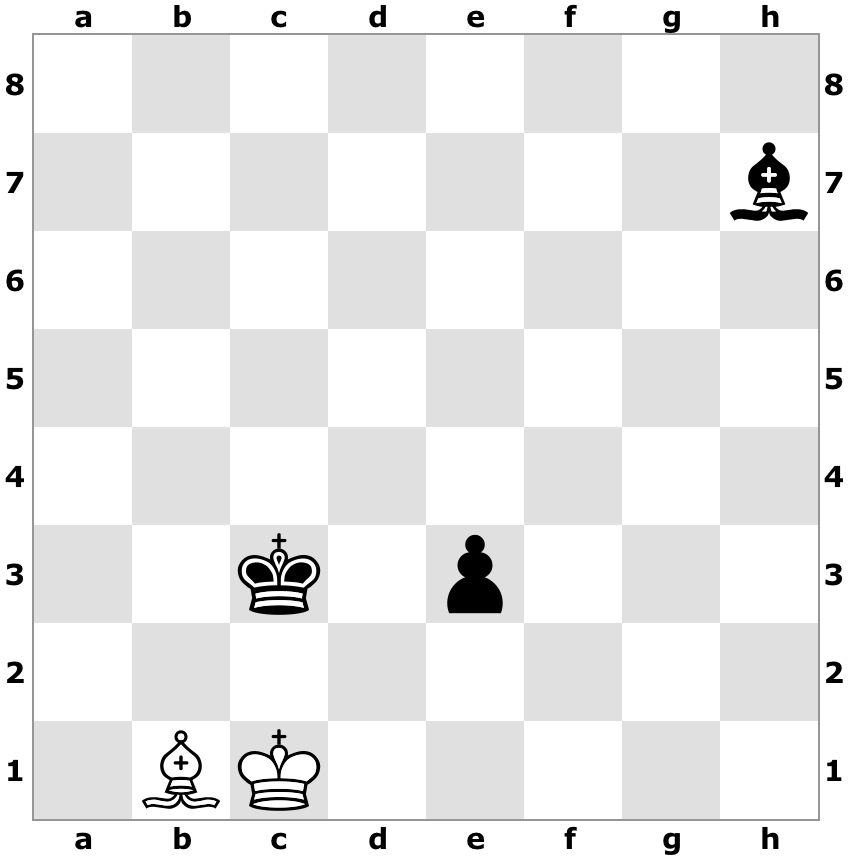 Solution. White should play 1.Bc2! (bishop one square). If Black’s own bishop captures, it is draw by stalemate (White has no legal move). If instead pawn to e2, White plays 2.Bd1! Either stalemate follows, or (with correct play) the game ends a draw.