1,400 skeleton found in Scottish Highlands may have been royalty, researchers say

Pic: Rosemarkie Caves Project/PA Wire NOTE TO EDITORS: This handout photo may only be used in for editorial reporting purposes for the contemporaneous illustration of events, things or the people in the image or facts mentioned in the caption. Reuse of the picture may require further permission from the copyright holder.

A Pictish man who had a "brutal death" about 1,400 years ago could have been royalty, researchers now say.

Archaeologists found the skeleton in a recess of a cave in the Black Isle in the Highlands.

Pictish is the extinct language spoken by the Picts, the people of eastern and northern Scotland from the late Iron Age to the Early Middle Ages.

The skeleton was discovered in a cross-legged position with stones weighing down his limbs while his head had been battered multiple times.

Analysis carried out on behalf of the Rosemarkie Caves Project now suggests he was a prominent member of the community, such as royalty or a chieftain.

The findings show he had a high-protein diet, which researchers have few other examples of during that period.

Simon Gunn, founder of the project, said: "He was a big, strong fella - built like a rugby player - very heavily built above the waist. 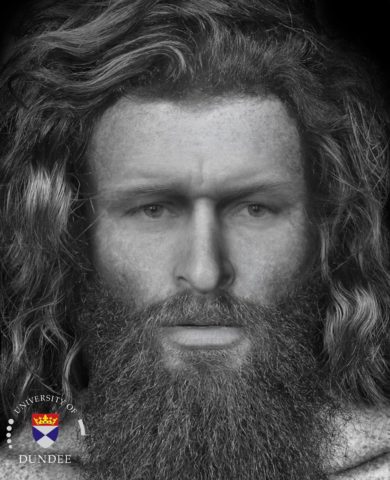 Pic: Rosemarkie Caves Project/PA Wire
NOTE TO EDITORS: This handout photo may only be used in for editorial reporting purposes for the contemporaneous illustration of events, things or the people in the image or facts mentioned in the caption. Reuse of the picture may require further permission from the copyright holder.

"It's rather peculiar that he had a very high-protein diet throughout his life, to the extent that it's as if he had been eating nothing but suckling pigs.

"He was a bit special, that could be royalty or a chieftain.

"Obviously he had a rather brutal death, but he was buried quite carefully in that cave."

Mr Gunn added he was only aware of two examples of people in Scotland around that time having a similar diet.

A bone sample sent for radiocarbon dating indicates that he died sometime between 430 and 630.

The man stood at 5ft 6ins and was aged about 30 at the time of his death.

His skeleton had no injuries other than those inflicted during his death. This suggests he was not a warrior or engaged in arduous labour.

Mr Gunn also said the cave burial could have been a way to place his body at an "entrance to the underworld" as part of a ritual.

The team believe there was a feast after Rosemarkie Man's death, either in celebration or reverence of his passing, as there were piles of animal bones near where he was discovered.