A visit to Venice

When asked to say or write anything original about Venice, it is not unusual to feel stumped: so much has been written by so many illustrious poets, novelists and travel writers about this iconic city. Venice is truly inexhaustible-its history, art, churches, public spaces, galleries, buildings, canals, and lagoon are a source of undiluted delight and constant surprise.

We have visited Venice three times. The first time I went with friends when I was studying in Rome; the second visit was a day trip with Barbara in October; the third, most recent and longest visit, took place in the dark days of late November. I have only a vague recollection of the first visit which took place after Easter when the watery city was bathed in translucent light. Our recollection of the third trip is still vivid and we will concentrate on that occasion in these articles. We shall also attempt to reveal the many literary associations of the city and thus endeavour to say something different and, we hope, entertaining.

We approached the city in a vaporetto. It was late afternoon and the time of year meant the light was already dwindling and the lagoon was exhaling a moist, cold and damp air. A lady, sitting on a bench at the front of the boat, decided it was time to seek the slightly warmer area under an awning which covered most of the deck. 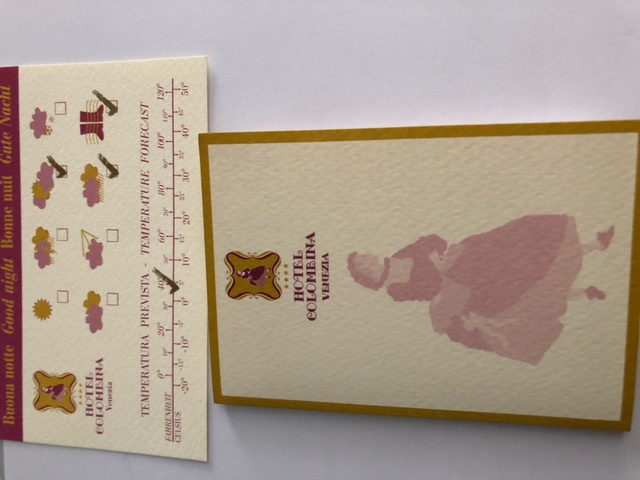 No sight can rival the gradual appearance of the distinctive skyline of the city which Lord Byron so aptly called ‘a sea Cybele fresh from the ocean/Rising with her tiara of proud towers.’ As you approach the quayside, the landmarks which define Venice come into view: the Doge’s Palace, the Basilica of San Marco, the famous Campanile, the column with the winged lion, a partial view of the Piazza of San Marco. If you refer to any other public square as a ‘piazza,’ you give away your status as an uninitiated visitor: there is only one piazza in Venice, San Marco’s, the other squares are known as campi or campielli.

Once on terra firma, we quickly found our hotel, the Albergo Colombina, named after one of the stock characters of the Commedia dell’Arte. The hotel was just behind the monumental basilica and we were glad we would always be able to find our way back after getting lost in the labyrinth of streets, squares, canals and bridges which composes the Venetian cityscape. The Venetian names, calle, campo, canale and ponte have their own charm and it’s gratifying to use them when asking for directions. The Italians always smile graciously when they hear their own language issuing from the mouths of non-native speakers.

Our first full day dawned grey and overcast. We encountered a group of Japanese tourists just off the Piazza. What struck us was the way they were shod. Were they expecting a deluge, even though the receptionist at the hotel had assured us there were no rain clouds on the horizon? The following day we discovered the reason for their odd boots: acqua alta! When the tide rises beyond a certain level, many parts of Venice are flooded, including the Piazza. We were issued with makeshift wellington boots that could be assembled and dismantled as required. It was important to remove them and put on ordinary shoes if you wanted to visit any church, gallery, cafeteria or shop. 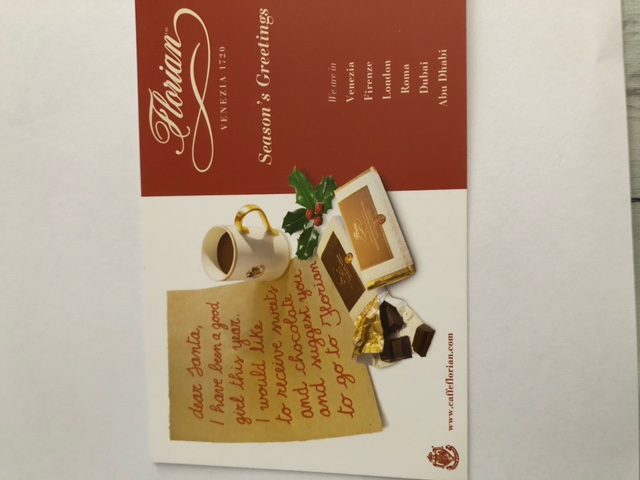 We hadn’t planned our first day in any detail, but thought it would be dedicated to absorbing the ‘atmospherics’ of the city. And Venice is prodigal in ambience and atmosphere! Mere breathing is exciting and visually you couldn’t get a more variegated and seductive panorama.

As we were feeling extravagant and spendthrift, we entered the hallowed rooms of Florian’s, the most prestigious and expensive café in Venice. The interior is all gold and mirrors and we indulged in a harmless daydream when we conjured up a picture of the likes of Oscar Wilde, Lord Byron and Henry James, seeing their reflections in those same mirrors. James in particular loved the place and wrote memorably: ‘I sat in front of Florian’s café eating ices, listening to music....and remember how the immense cluster of tables and little chairs stretches like a promontory into the smooth lake of the Piazza.’ It was too cold for us to relive James’s experience al fresco but looked forward to the magical beverage which cost us 18 euros. Alas, just like in other Italian cafeterias, the coffee was full of flavour but tepid!

That evening, having imbibed the daytime atmosphere, we strolled along the Via degli Schiavoni. A walk along this via is an integral part of exploring Venice. During the day, crowds frequent the via, and you cross over the Ponte della Paglia-the straw bridge- which affords a view of the Bridge of Sighs. The lagoon was shrouded in darkness, but stars punctuated the night sky, a slight drizzle made us quicken our step and when we looked seawards towards the right, the magnificent dome of Santa Maria della Salute, at the very tip of the other side of the Grand Canal, stood silent guard. Though there were few people about, our walk was accompanied by the ceaseless lapping of the water against the stones of the quayside and we saw the gondolas, now empty and moored, bobbing up and down, as if unable to relax and caught in the embrace of the moving waters.

The Cambridge historian, Iain Fenlon, starts one of his books with the following sentence: ‘The Piazza San Marco is the most famous and most instantly recognisable townscape in the West, if not the world.’ It is possible to spend two or three days within the confines of the Piazza and not exhaust all it has to offer. It is the heart of the city, and has the most magnificent display of sumptuous architecture. The Piazza has witnessed gorgeous pageants (Venice is unashamedly ostentatious about its beauty and grace), religious processions (you only have to look at some Venetian paintings to realise these were elaborate and only superficially concerned with religion), political activities and frequent carnival celebrations. The Piazza’s eastern end is dominated by the Ducal Palace and the Basilica. For the visitor who is less concerned with high culture there is plenty to satisfy her with elegant cafés, open-air orchestras and smart but expensive boutiques beneath the arcades of the Procuratie.

The Procuratie are the range of buildings constructed for the procurators on the north side of the Piazza. Its arrangement of porticos (fifty in total), with rooms above, had a political and propagandistic dimension, and are the main feature of Jacobo Sansovino’s enlargement of the original Piazza and gives it its distinctive classical appearance.

It would be presumptuous and foolhardy on our part to pretend to provide a detailed account of all the beautiful structures, both religious and secular, which grace this unique city. In later articles we shall choose a selection of places which exercised a particularly strong influence on our sensibility and which we visited more than once. An example would be the Rialto Bridge which spans the Gran Canal and which is almost emblematic of Venice. I think we crossed the bridge every day of our stay. Every visit was punctuated by recalling the famous lines uttered by Shylock: ‘many a time and oft/In the Rialto you have rated me/About me moneys and my usances.’ The darker, seamier side of Venice is expressed in Shakespeare’s lines and we hope to include this in our exploration of the city.