All the wrong moves

In one of Sasha Chapin’s blog posts, ‘You Can Probably Write a Book’, he identifies the factors which aided his own success in this endeavour. First, he had told lots of people he was going to write a book, and “not doing it would’ve been embarrassing.” The second stimulus came through his agent (they may have met “by accident”, but the law of attraction works in mysterious ways) who got him a contract; on signing it, “another person arose in me”, and wearing what he terms his “Invisible Author Mask” he settled down to the task. Draft followed draft until - miracle! - the mission was accomplished. A younger Sasha had quit his studies and spent two or three years working on a novel; the book did not get finished because, as the author candidly admits, he had a nervous breakdown. There had followed a period of creative self-expression through music. Sasha threw himself into the medium (“I wrote fifty or so songs before I started feeling confident”), recorded an album and gave live performances. But writing was still inside him, and it began to pay too: his articles found homes. There were also periods of depression, psychiatric treatment, and - crucially - a mood stabiliser which, he says, saved his life.

It was in Asia, although he didn’t plan it that way, that his book bug began its quiet burrowing - in a rubbly square in Kathmandu. A crowd had gathered, men were playing chess. Sasha was invited to join. He lost his games that day (and a few rupees) but found he kept thinking about his moves, the possibilities. He had hardly played chess since school. Returning to Bangkok - he had also spent three weeks in Chiang Mai, in the north of Thailand - all other projects and adventures were set aside; days and nights were now spent playing online chess. Sasha also scouted out the city chess club. Here he met “Teacher Mike” and was taken with the idea of playing in the upcoming Bangkok Open. He felt good, he was motivated: “I studied hard every day and went to the club weekly.” This was April, 2016. The morning of the tournament arrived; Sasha, over-anxious, was at the venue three hours early. He lost his game in fifteen minutes. “My incompetence was outstanding. I played worse than I ever had.” The next day he withdrew from the competition. With his tourist visa due to expire right after the tournament, Sasha headed first to New York (for “a brief, pleasant vacation”), then returned home to Toronto. He had been travelling five months. “My time away,” he writes, “left me with no real insights.” Except he was now addicted to chess!

‘All The Wrong Moves’, published last year, is Sasha’s book. Its self-deprecating subtitle sets out, succinctly, the author’s brief: ‘A Memoir About Chess, Love, and Ruining Everything.’ I finished its 200+ pages in a single day, so I can certainly vouch for the book’s readability. “I think it's quite good for a first book, and it's short and breezy. I'm not ashamed of it, which is more than I can say for most of my writing.” This fair review (on goodreads) is by the author himself, Sasha Chapin! I reached out to Sasha through social media and he was kind enough to respond to my questions. His website also gives links to some of his earlier work.

What is his book about? We follow Sasha in his quest to improve at chess. He enters more tournaments, first in Canada, then in Hyderabad (during part of this section I was laughing so much I had to put the book down!), and lastly in Los Angeles. He begins a relationship with Katherine, a senior editor “with glinting and mobile eyes”, and they move in together. But the road to chess improvement is long and dispiriting, and Sasha decides he needs expert coaching. He spends a month in St. Louis, where he receives regular lessons from grandmaster Ben Finegold. Along the way we are given accounts of actual games (Sasha’s opponents always disguised with made-up names), while “Finegoldisms” are offered as nuggets of wisdom, in a chess context certainly but perhaps in a life coaching sense too. Don’t lose all your pieces! Never sacrifice! Have less fun!

I checked with Sasha, who explained that during this period he played in many other chess events too; the book is not meant to be complete in this sense. In January, 2017 he even travelled to Wijk aan Zee, Holland, to support Canadian grandmaster Eric Hansen in a tournament there. Sasha sees the seductive beauty of chess, a “perfect information game.” He writes about World Champion Magnus Carlsen, but is also fascinated by the figure of Marcel Duchamp (about whom I also recently wrote two articles). “Given the choice of any profession whatsoever”, writes Sasha, “I would choose chess genius. I have not been given that choice.”

After India the narrative assumes the guise of a self-interview. The secret of chess (according to Finegold) is revealed at the end of the book. In his category Sasha performed well at the Los Angeles tournament; we last see him walking on the beach at night, “under a few exhausted stars.” He thinks to himself that “Katherine could fly down here tomorrow, and we could live some kind of life together.” In real life (I asked) they broke up a few months later.

Today Sasha and his fiancée Victoria live in Glendale, Los Angeles. In one of his essays Sasha describes Glendale as “a little boring” and “a little too urban to be a suburb”, but to me he called it “a rural exurb” - I admit to never having seen that last word before - with “lots of lovely wilderness around.” A day of less than good weather in LA is a rarity. The city, which one might expect its residents as well as visitors to exclusively negotiate by car, has “lots of little pockets that are fascinating on foot.” Sasha’s general view of Los Angeles is that it is “an extraordinarily good city to live in if you find your little slice of it.”

As well as working on his own projects, Sasha offers his services as a writing coach, and tells me this is going well. Does he still play chess online, or follow top events? “My chess consumption is about 10% of what it used to be”, he says. In some ways he misses it. Victoria and Sasha were supposed to be married already, but coronavirus has delayed their plans. They met, randomly (if such things ever are) in a castle in France. Back in their respective countries, they would talk on the phone “for an average of six hours a day.” Three weeks later Sasha flew to Prague, and proposed. If one had to use a chess analogy, one might say that this early gambit (played on the second day of his trip) was not immediately decisive. Undeterred, and perhaps over many days, Sasha proposed three more times. It was this last, fourth offer, that his “opponent”, Victoria, unreservedly accepted.

Karl Fabel was a German chess composer who created over a thousand problems of all varieties. For today’s puzzle, which he published in 1952, you almost need to think back-to-front. White to play: how to avoid giving immediate checkmate? A case of the wrong move being the right one! The solution is below. 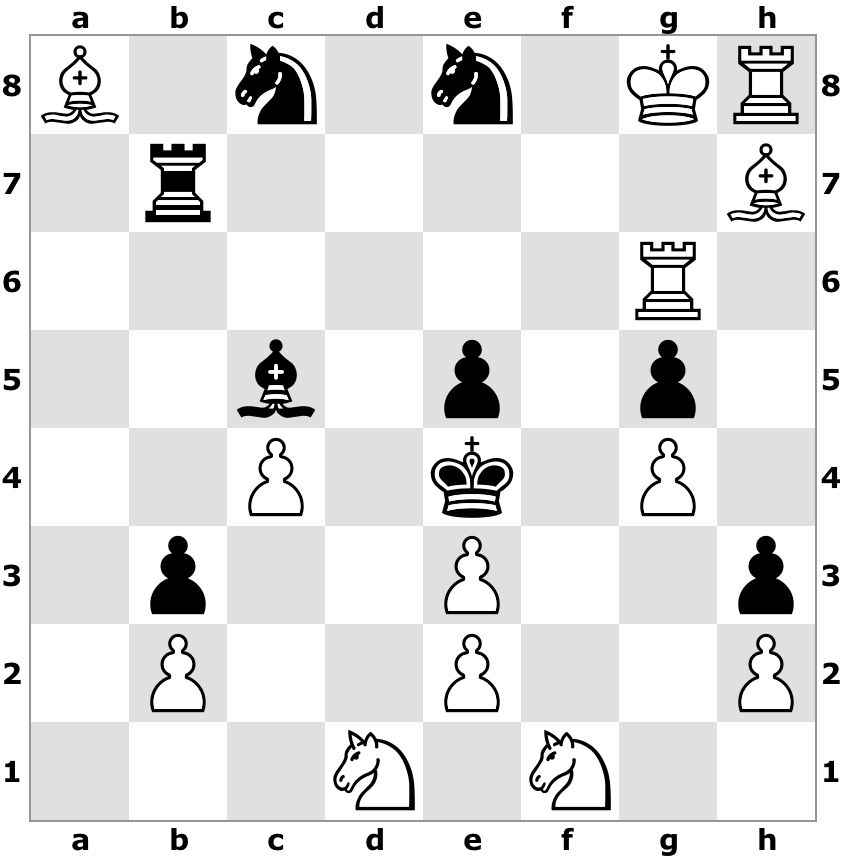 Solution: 1.Rc6! (the white rook moves to c6). Only this move permits Black a legal reply: the rook on b7 (no longer “pinned” by the bishop on a8) takes white’s checking bishop on h7.