On December 10, 2020, Malcolm and MarieCarmen Beanland celebrated their Golden Wedding Anniversary, 50 years to the day in 1970, when they were married at the Cathedral of St Mary the Crowned. 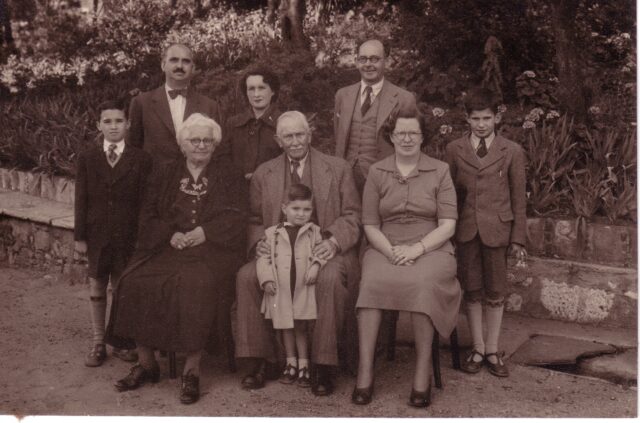 The very same place they were married by Fr Bernard Linares.

Due to the Covid pandemic, they postponed a celebration with their daughters and grandchildren until this week on Sunday when all the family were reunited.

70 years earlier in July 1950, Malcolm’s granny and grandfather, Charles and Eleonora Beanland, celebrated their Golden Wedding Anniversary and took a photo at the Alameda Gardens.

In that 1950’s photo is a young 3 year old Malcolm, in front of his grandfather, together with his parents Albert and Hortensia Beanland and brother Charles.

So last Sunday, Malcolm finally had his wish, when Mariecarmen together with their three daughters Catherine, Allison and Vanessa, and grandchildren and family, took a photograph at the same spot at the Alameda Gardens.

Later they held a family lunch at the Piccadilly Restaurant with music provided by Francis Chipolina and his cousin Pepe.

Two days later Catherine, Allison and Vanessa surprised their parents at a family and friends reunion for breakfast.

Malcolm and Mariecarmen thank their daughters, grandchildren family and friends for the wonderful moments enjoyed during the week’s celebrations of their Golden Wedding.