Part 2
The second day of the Calpe Conference began with a lecture by Dr Ugo Mellone, a freelance photographer and Research Coordinator of the Mediterranean Raptor Migration Network. Focusing on raptors, he explained that in the Mediterranean basin “species and population-specific migration strategies of raptors appear to be influenced by the interaction between wing morphology and the shape of the land masses they traverse.” Three peninsulas shape the region: Iberia, Italy, and the Balkans. He noted that at “a global scale, no other region on earth offers such an interesting scenario,” adding that this allows the testing of different hypotheses regarding the response of migrating raptors to the sea.

The next speaker, Professor Kasper Thorup, from the Centre for Macroecology, Evolution and Climate, at the University of Copenhagen, highlighted that migration is widespread among birds in order to exploit seasonal resources. Many species travel between continents and “negotiate vast barriers of sea and desert.” He noted that among species “the spatiotemporal schedules appear fine-tuned to different resource gains along the routes.” Kaspar discussed aspects of current resource tracking by birds, the great distances travelled, navigational programme, and potential changes in past spatiotemporal schedules, and held that: “the many migrants with complex life-on-the-move strategies have been able to adapt flexibly to past climate change and are potentially able to do so also in the future.”

Ecology and evolution are central to understanding the life histories, behaviour, and interactions of organisms. Professor Pedro Jordano of the Spanish Scientific Council at Estación Biológica de Doñana, Sevilla, had also been a speaker at Calpe 2010. He has an interest in how ecological interactions shape complex ecological systems and spoke about passerine Palearctic-African migration, noting that many species are closely “associated to major dietary shifts.” These, he said, included the consumption of seeds and fleshy fruit. He highlighted that the frugivorous diet impacts “the dynamics of fat reserve accumulation, energy, and nutrient balances of the birds.” The variability of phenology, pulp nutrient content, and colour, “marks distinct foraging preferences by the frugivores.” Pedro held that passerines contribute to a “major portion of the seeds of different shrub and tree species dispersed every year,” adding that “bird-plant interdependence has favoured the coevolution of mega-diversified plant-frugivore interaction networks that support the Mediterranean scrubland ecosystem.” 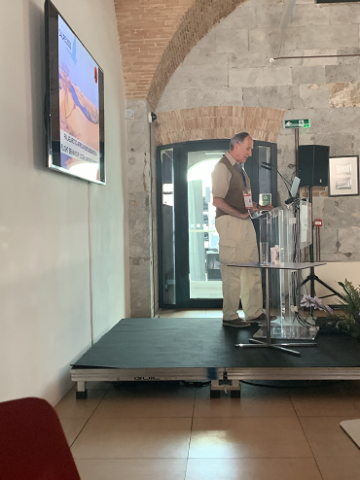 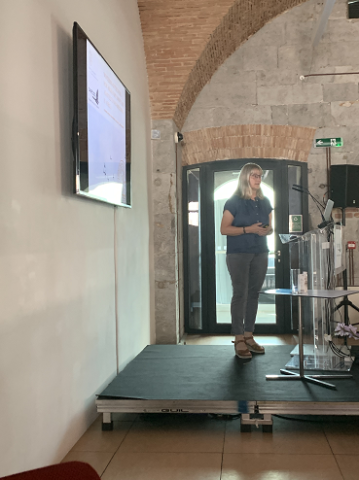 The first speaker after lunch was Professor Bruno Bruderer from Basel University. A leading ornithologist, he was Head of the Migration Department at the Swiss Ornithological Institute from 1972 to 2007 and pioneered the use of tracking radar for migration studies. Bruno had also been a speaker at Calpe 2010. He discussed bird migratory directions between Europe and the Sahara explaining the technologies used to gather data and understanding about these movements. The use of pencil-beam radars, for example, elucidated how the vertical distributions of migration are shaped by persistent wind systems and topography. Radar studies have also provided data on concentrations of migration in parts of the Mediterranean and the Sahara. Studies of trans-Saharan migration using fixed radar stations, confirmed high altitude selectivity by birds dependent on the trade-wind system, the preference for nocturnal flight and diurnal rest in passerines, and the prevalence of energy versus water-saving. Bruno noted that: “Multi-sensor loggers open new insights, for example, refining localization, by integrating atmospheric pressure all along migratory routes from central Europe to tropical Africa and back.”

The final lecture of the day was by Professor Susanne Akesson, from the Centre for Animal Movement Research at Lund University, Sweden. She studies the movement ecology of birds and how birds have adapted to undertake long migrations and how they navigate across space. She noted that: “Spectacular long-distance migration has evolved repeatedly in animals enabling exploration of resources separated in time and space,” adding that in birds “these patterns are largely driven by seasonality, cost of migration, and asymmetries in competition leading to differential migration.” She described the current progress of a 30-year long research project on the migration of swifts. Microdata loggers were used to record the flight behaviour and movement strategies of individual swifts. Susanne reported some of the fascinating results. The data collected show that “several species of swifts spend the non-breeding period on the wing, putting the physiological challenges to the extreme in these aerial insectivorous birds.” In addition, she noted that tracking data further revealed “differential circannual timing and migration strategies between populations, including high mobility during the non-breeding period and differential migration speeds,” and showed an “unusual migration pattern in European common swifts wintering in sub-Saharan Africa, likely driven by differential circannual timing and diffuse competition for resources.”

After a short tea break everyone returned to the conference hall for the presentation by Minister Cortes of the Finlaysons’ book, Bird Migration between Europe and Africa. Clive, Geraldine, and Stewart had worked together to provide a marvellous volume about bird migration which included a breath-taking collection of photographs by the Finlaysons. In the Introduction they wrote: “Our aim with this book is to highlight the beauty of migratory birds that migrate annually between Europe, Asia and Africa. In the process we will highlight the drama of migration, with its many perils, and the manner in which many species which were once common, are now facing serious population declines. In planning this book, we felt that the birds themselves should tell the story as much as possible so we decided that our photographs would be the storytellers,” adding that: “The timing of this book is no coincidence. It commemorates the 50th anniversary of Reginald Moreau’s seminal work The Palaearctic-African Bird Migration Systems… we celebrate the work of a gifted person who was among the first and most prominent interlocutors for these long-distance travellers.” Speakers were happy to have each been presented with a copy which they perused on return to their seats. A discussion about maps, data collection and types, ended a very successful second day of the Calpe Conference.