Under a light pink sky and through the calm waters of the port, soldiers from D Squadron Household Cavalry Regiment landed on the pontoons within the Naval Base early Sunday having made their way from Rosia Bay before conducting an attack on the enemy within the Rock’s tunnels.

Three RHIBS provided by the Gibraltar Squadron made as many trips to carry the men and women to the Naval Base while soldiers spread out and secured the area. Only the shouts of commands could be heard over the scuffle of feet and the odd seagull squawk. 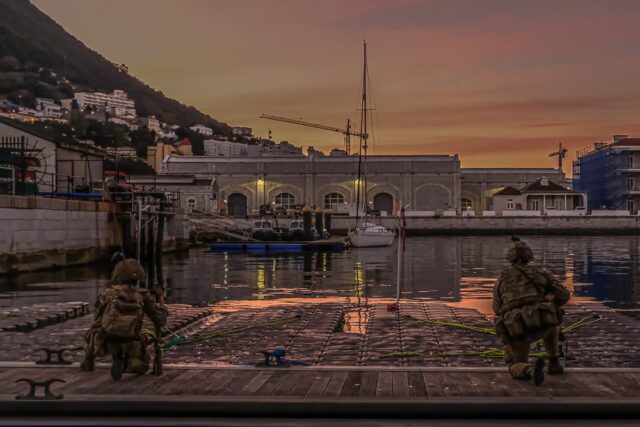 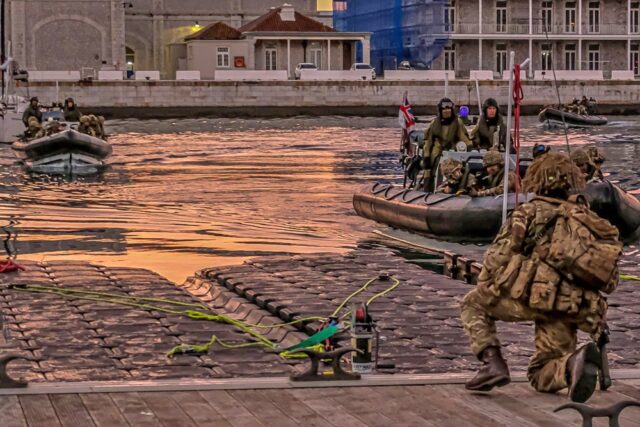 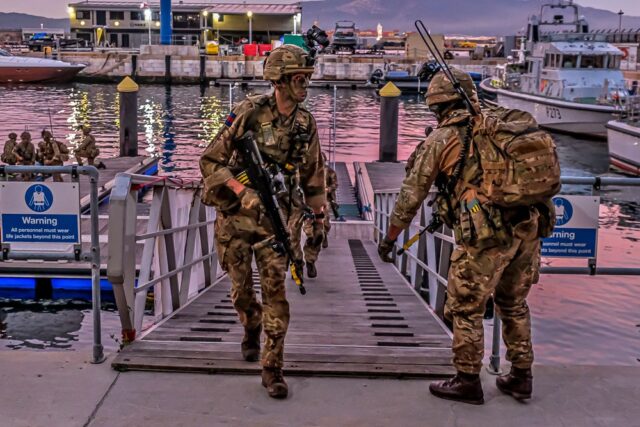 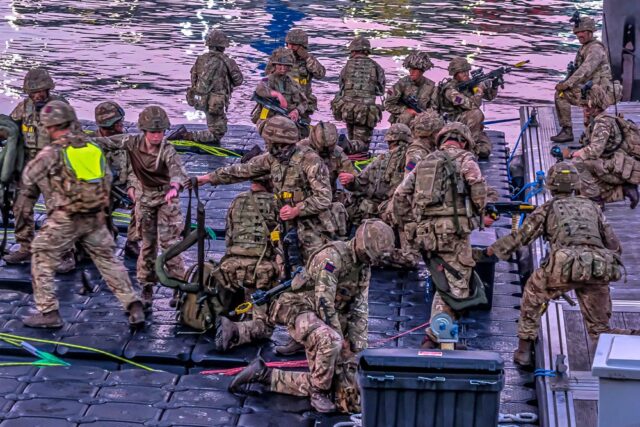 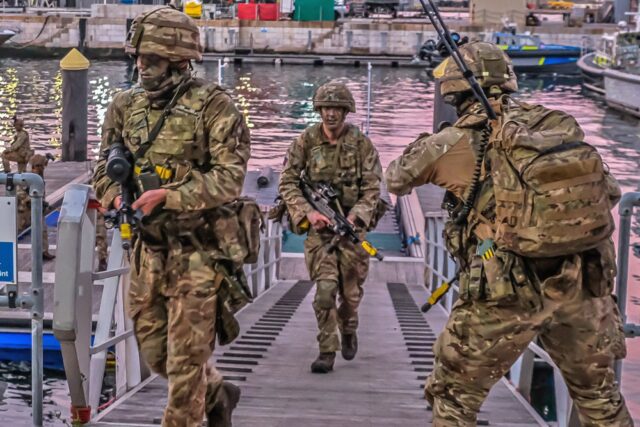 Once ashore, the soldiers dressed in full camouflage stealthily made their way through the Admiralty East-West tunnel and conducted an attack on enemy within the tunnel systems on the Eastside and a clearance of the REME chambers.

This was, of course, role play with a purpose. The notional enemy were occupying the tunnels as a weapons cache that the Squadron was tasked to secure, as well as capturing key members of the enemy leadership structure.

This exercise was a culmination of their training on the Rock and thoroughly tested the troops’ ability to operate in the confusing and challenging subterranean areas.

Daring Rock deployed with 87 personnel, with 12 of these playing enemy and a number of these providing real-world support including chefs, administrative assistance and supplies.

D Squadron Leader Major PJR Chishick LG told the Chronicle that the goals of the exercise were “absolutely” reached.

“The aim of the exercise was to test our ability to operate in small teams in a complex environment,” he said.

“The regiment is part of the British Army’s new Strike Brigade, which is designed to operate at greater reach and range than a conventional brigade.”

“As a result, soldiers need to be able to act more independently and make decisions in a challenging environment.”

“The point of conducting this exercise was that the urban environment and particularly subterranean environment inhibits our ability to communicate as effectively, and relies on good command and control at the lowest level and seizure of initiative by the lowest ranks.”

“The tunnel systems of Gibraltar have really tested this.” 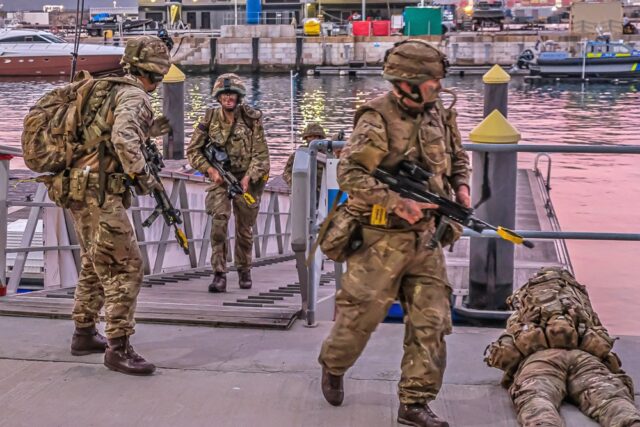 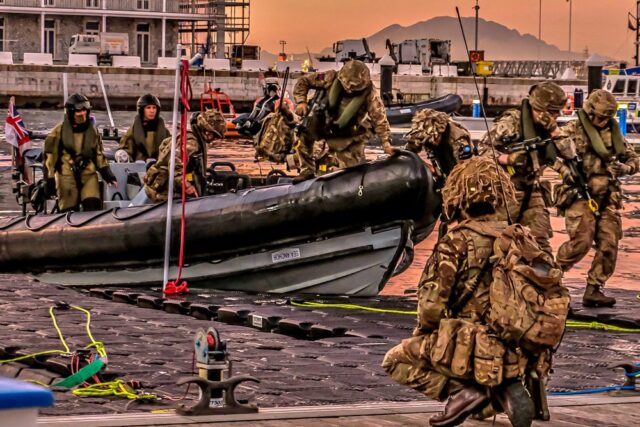 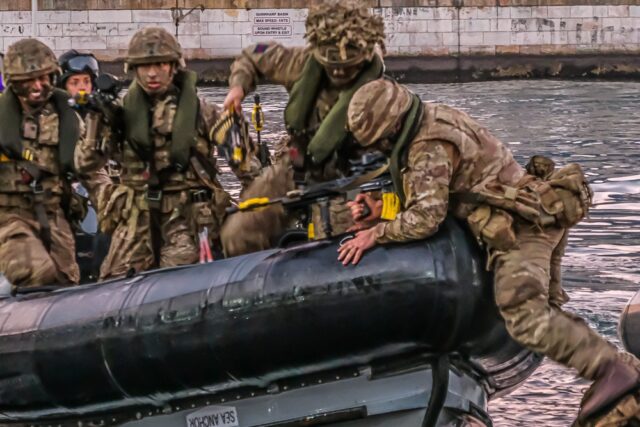 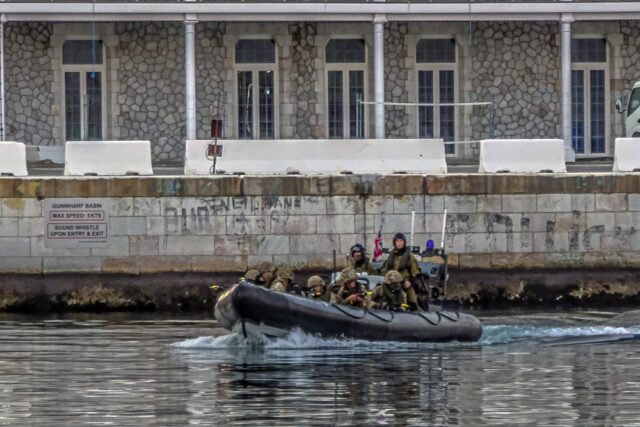 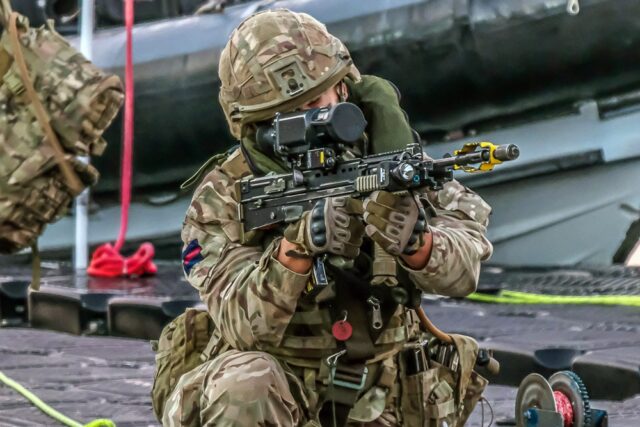 The soldiers of D Squadron usually operate from armoured vehicles which leaves them less exposed when compared to boats.

As a result, the novel experience put some of the soldiers outside their comfort zone.

In addition, fighting within the tunnels was a new experience for them.

“Within the scenario of the exercise, this enabled us to insert covertly to reach another tunnel system to approach the enemy from an unexpected direction to generate surprise,” said Major Chishick.

“Our armoured soldiers are highly adaptable, and they rose to the challenges put in front of them.”

“Within the exercise scenario, we defeated the enemy force of 12 personnel, capturing their leader in the tunnel system.”

“The additional challenge that fighting in complex terrain, such as tunnels and the urban environment provides is that a small number of opponents can have a disproportionate effect.”

The Squadron sustained some simulated casualties during the final attack, which tested its casualty evacuation procedures and low-level leadership under stressful situations.

“We have two Combat Medical Technicians attached to the Squadron who train with us throughout, who are there to deal with real-world injuries as well as ensure that the drills that the soldiers conduct during the simulated casualty evacuations are correct,” said Major Chishick.

“This is so that in a real scenario, soldiers would be able to conduct these drills effectively and efficiently and, ultimately, save lives.” 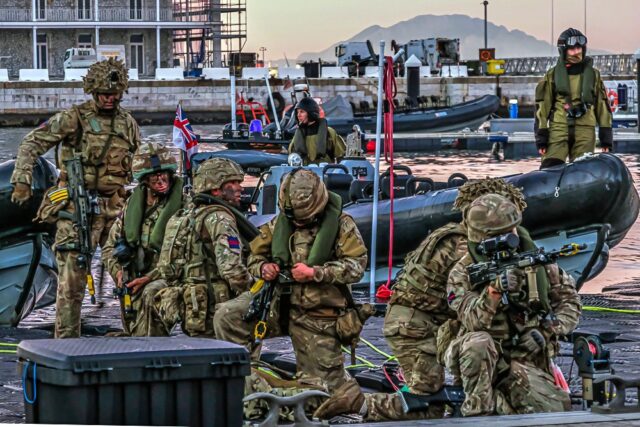 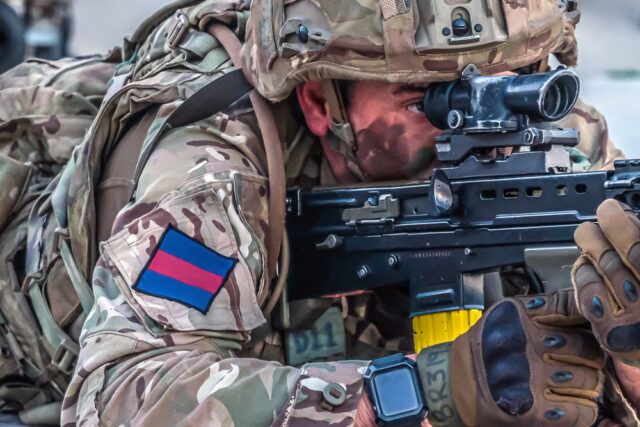 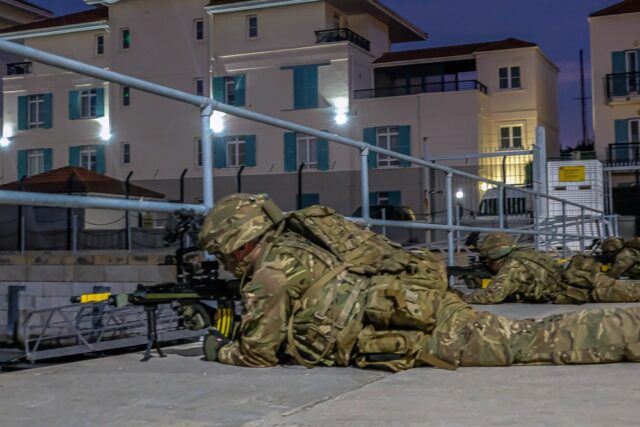 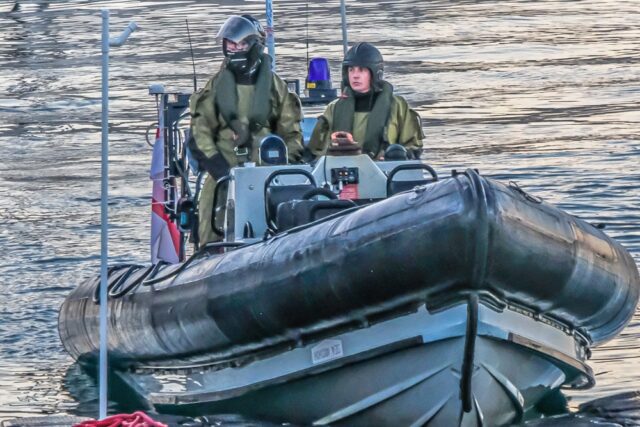 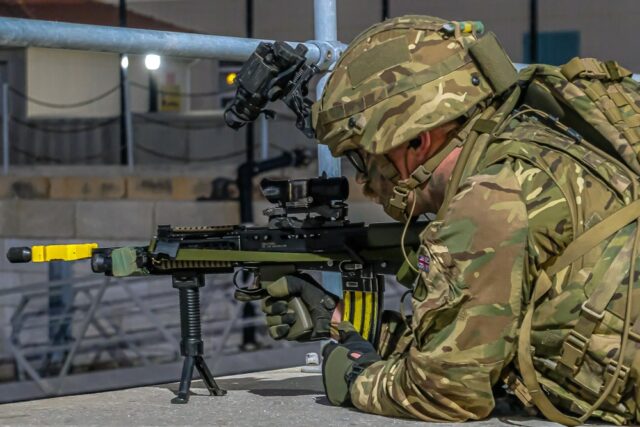 The D Squadron leader also confirmed that the soldiers thoroughly enjoyed the exercise.

“It has been a real novelty for most being able to get abroad on an overseas training exercise and to experience new training areas and the challenges that Gibraltar’s complex tunnel systems provide,” he said.

“We are also hugely grateful for the assistance provided by the Royal Gibraltar Regiment, HQ British Forces Gibraltar and the Government of Gibraltar for allowing us to train in areas that have not been used much in the past.”

When asked what the highlight of all the training exercises over seven days, he said it was the Squadron-level attack into the underground systems in Calpe Hospital tunnels and Peterborough Chambers.

It “really tested our communications links and ability to coordinate our troops,” he said.

“The team have really developed their skills and drills over the course of the past couple of weeks and all are now better soldiers for it.”

The soldiers are now looking forward to some rest and relaxation during their final few days in Gibraltar, taking part in some adventurous training and sports that will include the gruelling Rock Run to the top of the Rock.