First Gibraltarian recognised by Round Table with International Honour Medal

Local barrister Nicholas Gomez has become the first Gibraltarian to be awarded the Round Table International Honour Medal, with Round Table Gibraltar also scooping the ‘Community Service Project of the year’ award for the Southern Europe and Mediterranean region for the first time.

This is the first time that a Gibraltarian Round Tabler has received this award, which has only been awarded eight times previously in the history of the Round Table, as special recognition for exceptional service to the organisation and the movement.

Mr Gomez is the Public Relations Officer at Round Table Gibraltar and is a barrister at local law firm Charles Gomez & co. 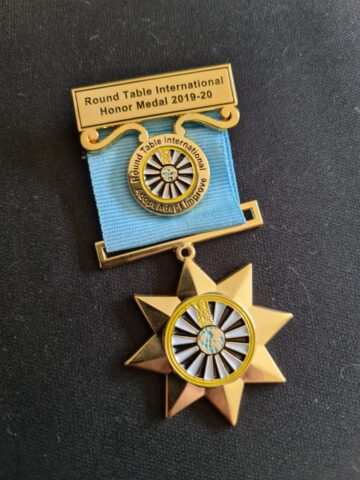 This is also the first time, since the Gibraltar club was chartered in 1978, that it has received the ‘Community Service Project of the year’ award.

The region consists of 11 countries around the Mediterranean and Southern Europe including France, Italy, Switzerland and Morocco and has more than 4,000 members.

The award has been given for Round Table Gibraltar’s charitable work throughout the year and specifically for its annual ‘Texas Hold’em Charity Poker’ event which saw more than 80 participants.

The money raised was donated to GibSams, a helpline charity, to assist with their work in the local community.

Round Table is an international organisation with more than 31,000 members in 67 countries.

Round Table raises more than £24 million a year for charity and carries out many community projects worldwide and in some of the poorest areas and is part of the ‘Round Table Family’ which includes sister organisations: Ladies Circle International, the Agora Club, the Tangent Club and the 41 Club.

Gorham’s Cave monument up before DPC