Gibraltar could not have had a worse start in their Saturday evening FIBA European Championship for Small Countries match against hosts Ireland.
A 13-0 lead with just four minutes gone was only compounded by the fact both head coach Adam Cassaglia and player Miguel Ortega also started to accumulate technical fouls. With just nine minutes of the match gone Cassaglia was given his marching orders after a second technical call against him. Ortega having to sit out part of the match after getting his third foul.
Surprisingly, the technical calls saw little in terms of arguments or controversy described even by host commentators in the FIBA Live stream as the “quietest” technical fouls seen.
The absence of their head coach from the touch line was to weigh heavily on Gibraltar against a very dominant host nation as opponent.
Faltering in offensive play and with Ireland more than ready to take any chance given Gibraltar fell 14-31 behind after the first quarter.
Gibraltar threatened to come back into the game in the second quarter as they started to grab some points going to 23-38.
A time out by Gibraltar played into the hands of Ireland who lifted their game and started to rebuild on their lead. By half time Ireland were 28-57 into the lead.
Gibraltar came into the third quarter with some confidence even though they had seen the gaps difference nearly doubled.
Although Gibraltar was out of contention they did not ease off their pace. This even though they knew that the next day they played a crucial match against San Marino which would determine the bottom of the table.
With the top of the table also to be played for the next day with Ireland playing Malta the Irish kept on looking for points.
Gibraltar started well the third quarter which saw them go to 37-71 with their play on court providing some positives even with a score line which was heavy to carry in the final two quarters after a disastrous first half.
Gibraltar equalled their best scoring of points with three minutes left of the quarter. Although not going that further after in the quarter.
Ireland, however, kept nudging forward on the points difference. With two minutes left of the quarter Ireland already were 34 points ahead, double the points gap from the end of the first quarter.
The technical fouls on Gibraltar also kept piling up on Gibraltar. The third quarter finishing with Gibraltar 46-83 behind.
Pride had kept Gibraltar alive on the court as they played to ensure that the points gap was not widened.
Looking also at aiming to try and come away with at least a credible amount of points to their name.
Ireland reached their century in points as Gibraltar stalled in the fifties. With just four and a half minutes left Ireland were 100-55 ahead.
Ireland once again reached the 100 point mark for the second time in this tournament. Having beaten SAN Marino 107-59. Also having come close to the century in their victory against Andorra by 96-81.
Gibraltar faced a fifty point defeat with Ireland winning 113-63, their highest score in the tournament. For Gibraltar the only positive was that San Marino had lost against the host by 48 points just two less than themselves. Gibraltar having scored a reasonable 63 points.
They now faced a Sunday afternoon clash against San Marino where both will be playing for pride.
The match can be seen live via FIBA livestream at 4pm. 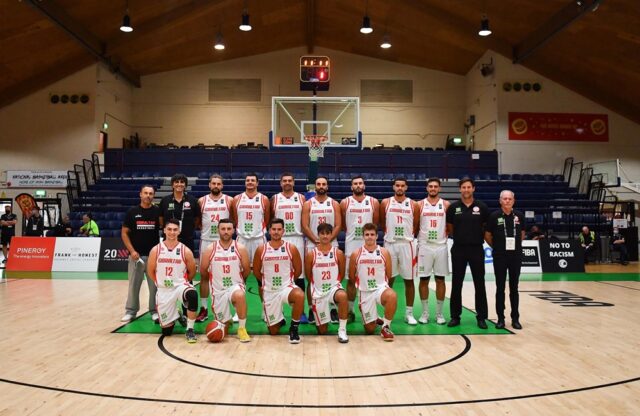 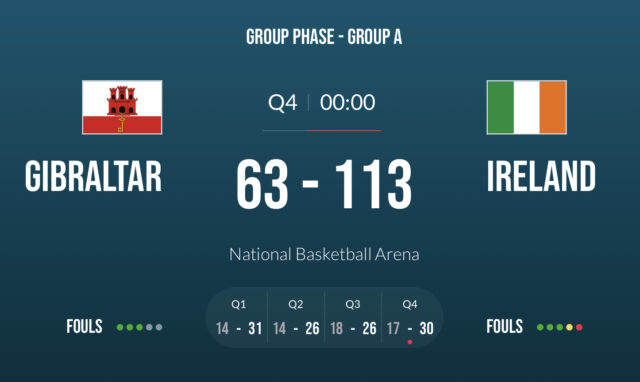