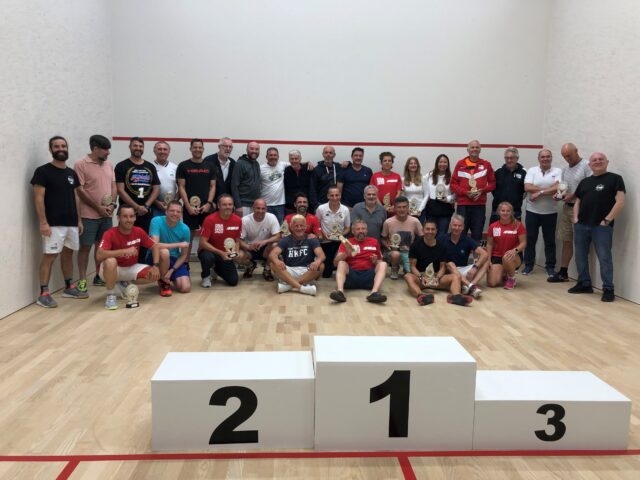 International Squash returned to the Rock this weekend when the Gibraltar Squash Association hosted a European Squash Federation Masters Circuit competition. Eligible to players from across Europe, the Masters tour is held across various countries in Europe for players over the age of 35. The tournaments are split into categories according to age and gender. A total of 14 events were held, contested by players from 8 different nations.
Gibraltar was fortunate to be able to hold this event, as the planned Hungarian Masters had been cancelled last minute. Quick action, together with the generosity of our sponsors including our main tournament sponsor, Betfred, enabled the GSA to host the tournament. With the positive feedback from all of the players that attended, it is hoped that this will become the first of many Masters tournaments in Gibraltar and become a regular fixture on the Masters Circuit.
There were many closely fought matches over the weekend, as players vied to become top in their category. Close matches drew the spectators from across all the divisions, with the following matches deserving particular mention:

Men 70+ category: Gibraltar’s Patrick Nerney against the UK’s Bryan Francis in a battle for second place in the over 70s. The Englishman winning despite Patrick recovering from 2-0 down. Jose Luis Alba from Spain winning all four matches to take the title.

Men 55+ category: A strong victory in the final for France’s Guillaume Lahourcade against Marcus Hall in three games, despite Hall pushing the Frenchman harder and harder in every game.

Men 50+ category: Gibraltarian Colin Davis throwing everything he had at Pedro Moreno Diaz to try and get to the final, using some characteristically unorthodox (and not necessarily deliberate!) shots to take the match into a deciding set. However, Pedro came through to book himself into the final that he ultimately would lose to the impressive Jesus Souto from Spain.

Men 45+ category: Neither Chris Dunckley nor Stevie Schacaluga were able to prevent Juan Gabriel Iranzo Escolano from progressing to, or winning, the final. An unusual yet effective, powerful, double-handed backhand together with excellent court coverage taking the Spaniard to the title.

Women 40+ category: The match of this category had to go to Charmaine Da Silva and Ying King To, with players winning alternate games effectively for the second place spot. Ying King eventually won. Gibraltar’s Mel Camilleri-Bland, however, was unstoppable and won the division without dropping a single game.

Women 35+ category: The battle between the Gibraltarian top two seeds saw Leanne Moreno playing Jess Gomez. Leanne got off to a strong start winning the first two closely contested games, setting up a lead. Jess responded with a real comeback by winning the next two games comfortably. This set up a decider with both competitors keen to take the title. At 8-8 the game could have gone either way, but Leanne came through to win the match and the division.

Men 35+ category: This section attracted some of the best squash players, with GSA coach Ivan Flores fresh from his win in the Spanish leg of the Masters tournament playing Neil Macarron, looking to go one better than his runner-up in the Portuguese leg. Some delightful squash ensued with shots and retrievals that had the gathered crowd in awe. Ivan simply outplayed Neil coming through in three games to take the title.