Mairead Sheriff one of our young talented prospects attended an International Training Camp (ITC20) together with her coach and dad Darren Sheriff and competed in the RWS Cup in Germany from 8th – 19th January 2020. The ITC20 was conducted at the MEC training range by Heinz Reinkemeier and Gaby Buhlmann two of the world’s most successful coaches.
Heinz Reinkenmeier is a coach, sports psychologist and author of a number of titles including ‘Ways of the Rifle’ (2009) and ‘The Psychology of a shot’ (2013) and other Publications in various journals and videos on shooting in Germany and other countries. He has been coaching nationally and internationally since 1980. Coach to various high profile successful individual shooters from various countries.
Gaby Buhlmann is a psychologist and rifle coach. European air rifle champion 1997, holder of the Swiss air rifle record. Participated in five Olympic Games as an athlete (1988 – 2004) and four as a coach (2004 – 2016). Co-author of various specialist publications and coaching videos. Coached a number of multiple Olympic Gold medallists such as Nicco Campriana (Gold 3x40 +Silver in air rifle 2012 London, Gold in air rifle in 2016 Rio) and Abinhav Bindra (Gold in air rifle in 2008 Beijin).
Mairead was joined by a number of professional shooters from Spain, Norway, India, Japan and Germany at the training camp. She has experienced tutoring within a professional set up that involved 7 hours of intense daily training. This required physical and mental fortitude. The course covered every aspect of rifle shooting within the following criteria: - 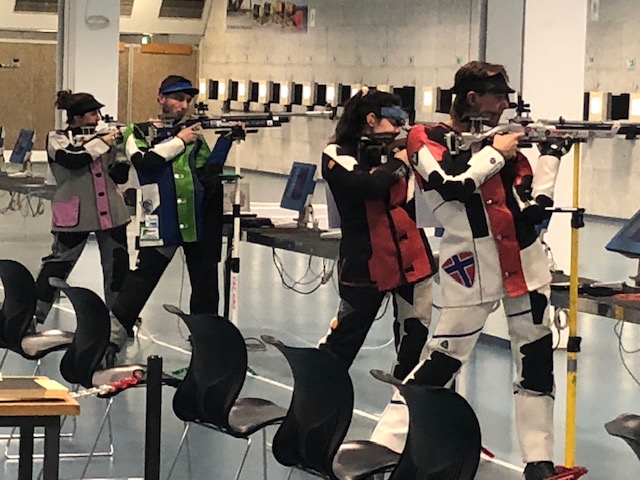 The learning acquired has been immensely important for Mairead’s development within the sport. She also performed admirably in the RWS Cup 2020 competition. The RWS Cup was attended by top Junior and Senior shooters from around the world. Mairead attained a 10th place position on both individual junior 60 shot competitions shooting 610.0 and 612.6. She was very close of making the final on both days. The highlight came on the mixed event were she partnered Norway’s Champion Henrik Larson in the Senior competition. The mixed event has a qualifying round were each athlete shoot 30 shots and both scores are added. The first eight teams go to the next round with each athlete having 20 shots and the scores added. The first two ranked teams dispute the Gold and Silver final and the third and fourth teams dispute the bronze final. Mairead and Henrik achieved a third place finish out of 18 in the first qualifying round and fifth place in the medal qualifying round missing out on the bronze final by the narrowest of margins 2 decimals of a point. This was a memorable experience and a performance to be proud of.

Albert Buhagiar President of the GTSA commented ‘Mairead is a talented young shooter, attending these high profile courses under a professional set up is undoubtedly a very important step to continue to progress and develop within the sport and build upon the her impressive Gibraltar Island Games achievement were she attained 4 Silver and 1 Bronze medal. Equally important is having in-house qualified coaches. Darren has achieved an important milestone in his coaching career having received his certification from two of the world’s best coaches. Our Association will benefit tremendously from the wealth of experience Darren has brought back from the course. The GTSA works hard to support the development of all their shooters and coaches and congratulate Mairead and Darren on their achievements’.

The GTSA will also host the XXIX GTSA Open Championships 2020 on 23rd 24th 25th May 2020 and for the first time ever we will be incorporating 3P 3x40 in addition to Air rifle and Prone.