Mrs Gibraltar 2nd Princess Michelle Harrison spoke to Richard Cartwright just before she jetted off to Sofia, Bulgaria for the Mrs Europe Forum.

That could well be one of Michelle’s fellow contestants competing alongside her at the Mrs Europe Forum this coming Friday, October 14 in the Eastern European country of Bulgaria, but no, Sofia is the country’s capital and the city where Michelle must already be very, very busy in rehearsals in preparation for the big night.

When we met last week, like most women – and very especially when preparing for a big event like Mrs Europe – she was well into her preparations here at home. ‘What to wear, what should I take and will I get everything into just one suitcase?’ But I’m certain she sorted it and is now having a great time in the Bulgarian capital...Beauty contests, pageants, forums – call them what you like - have always grabbed Michelle’s attention in a big way since she was little and was always determined to take part in them when she `came of age.’ Eager to compete in the Miss Gibraltar shows came to a no-no unfortunately, because of personal circumstances. Then in 2019 she came along and entered the Mrs Gibraltar event run by Mark and Angel’s Ideal Productions. She won nothing that year, but persevered.

“In fact, I was the only contestant to come off stage with, nothing,” she said. 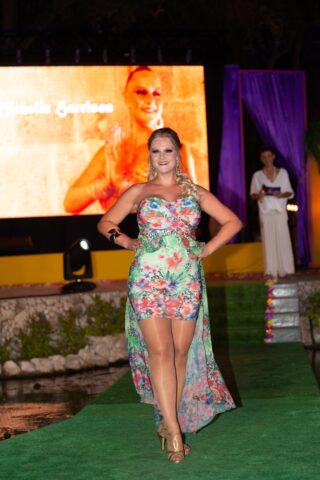 Well, let me tell you she took it on the chin was not upset showed no bitterness, went through the dreaded Covid pandemic for two years – which gave her lots of time to think about what had happened in 2019 and call it a day - many would have said, `not again’ – but she entered again.

She went ahead, backed by her sponsors Sovereign Trust - where she works in administration and thanks them loads for all their help.

Undeterred and determined to prove her worth as a mature woman - now in her early 30s and a mother of two - she achieved third place as 2nd Princess at the Mrs Gibraltar 2022 event and now, she’s away from the Rock representing us at the Mrs Europe Forum in Bulgaria.

There are many other competitive events of this type held in many countries like, Women of the Universe, Mrs Universe and others including I’m told, held in Spain, so it seems the controversial `commonly known’ beauty pageants are alive and kicking...Emphasis however, is turning to `Beauty with a Purpose,’ dealing with domestic violence and abuse and getting involved in charity work.

Since then, she will have toured the city with the other girls from many other European countries which I’m sure Michelle was keen to meet and present them with Gibraltar goodie bags etc, and busy at rehearsals now in different outfits (designed by Rose and Lindsay Robba of Mystique Rose Couture.)

It’s a big `Good Luck,’ to our Most Responsible Spouse (MRS) and hope she returns to the Rock as the winning European Spouse.