Nine ways to get picky children to eat more vegetables

Parents have traditionally battled to get their children to eat vegetables, but it seems the tables have turned, as increasing numbers of children are eating their greens, and plenty of other colours of veg.

Research by Birds Eye found almost a third (32%) of parents of children aged between four and nine years said their children would eat just about any type of vegetable, with colourful carrots, peas, sweetcorn and broccoli being the favourites.

Clinical psychologist Dr Elizabeth Kilbey, star of Channel 4's The Secret Life of 4, 5 and 6 year olds, says: "It's no surprise children are becoming more adventurous with the vegetables they eat.
The rise of flexitarian or plant-based diets and leading food influencers focusing on veg-packed recipes are all signs that healthy eating has become a huge part of popular culture.

"Children learn through observation and are heavily influenced by what they see adults around them doing. If parents have a varied diet and an adventurous approach to food, then it's likely to rub off on their children, so it's vital that parents aim to add different coloured vegetables to the plates of the whole family."

The research also found children are more likely to try new food when they're at school, nursery, or at a friend's house, suggesting they might be more open to experimenting with food when away from home.

To test this theory, and in celebration of their Eat in Full Colour campaign. Birds Eye opened a unique children-only pop-up restaurant, First Plates, aimed at encouraging less adventurous eaters to try a rainbow of vegetable dishes. 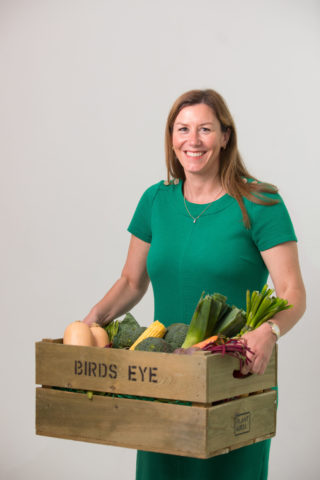 As part of the campaign, here Dr Kilbey suggests 9 ways to encourage children to eat more veg:
.1. Variety is key
The texture of vegetables can sometimes be an issue for children. If they don't like the texture of one vegetable, they tend to lump all vegetables into the same category by assuming they won't like them all. Encourage them to try different options, and also remind them they can't be sure they don't like something until they've tried it.

2. Mix up your eating environment
Children are very influenced by the environment and will often not want to stand out or be left out. So if their friends at nursery are eating something new, they may be more likely to try it. Having a chat with nursery staff or with other parents can be a great way to get children to try new vegetables you can later introduce at home.

3. Consider colour
Children are strongly influenced by the look and smell of food and will make a decision on whether they like something just from how it looks, whereas adults want to know how it tastes. This means children may associate certain coloured foods with tastes they don't like. Serving children colours of vegetables that are familiar to them or they associate with foods they like could be easy wins. For example, if children like sweet potato, then offering it with other orange-coloured veg like butternut squash is likely to encourage them to try it.

4. Make food fun
It's an old adage that children shouldn't play with their food - but maybe they should. By relaxing the rules and allowing children to be messy at mealtimes, you'll find food becomes more appealing to them and they'll be more likely to eat it.

5. Don't panic
One of the most important tips I can give to parents is not to get stressed or let it impact on your opinion of yourself as a parent. It's very common for children to not be very keen on vegetables, or to only have a small repertoire of vegetables they eat. but give it some time, creativity and perseverance and most children will include a variety of different vegetables.

6. Let children explore their food
Children are naturally curious. So, when looking to introduce your child to a new vegetable, give them the opportunity to give in to this natural instinct by relaxing the focus on eating it straight away and leave them to explore it. Whether they touch it, smell it, lick it or put it against their cheek or lips, this process is a vital part of children getting familiar with a food before they actually eat it.

7. Get them in the kitchen
By getting your children to give you a hand in the kitchen, you can not only teach them valuable cookery skills but also a lesson in healthy eating. Your little ones are also far more likely to try new vegetables if they've been involved in the preparation. You could try boiling some frozen vegetables with chicken stock and then let it cool to room temperature before handing over to your little one to blitz with a stick blender for a warming soup.

8. Keep it familiar
Children often won't eat a new vegetable in isolation but more often than not, they'll give it a try if it's mixed with other familiar foods they enjoy. So always introduce small amounts of new food alongside some of their favourites. Try serving cubes of roasted sweet potato among white potato or adding frozen peas or vegetables into their favourite risotto, pasta or stir-fry to add extra goodness.

9. The same but different
I would encourage parents not to become disheartened when their child refuses to try a certain vegetable, instead, try and cook it in a different way. One of my favourite tips is to boil carrots, add a little cream and some cumin and blend it to make a puree. It's also worth ensuring you're cooking your vegetables in the best way. Proper cooking methods ensure you get the most delicious taste as well as more health benefits - for example, cooking frozen veg in the microwave preserves a lot more of the goodness of the vegetables compared to boiling them in water.
(PA)

One of the RGP’s youngest Sergeants, Tanya McLeod