By Hannah Stephenson
Your dahlias and nerines may still be going strong, but if other annuals in pots are past their summer best, there’s a huge range of plants that can offer stunning autumn container colour.

From chrysanthemums and violas, to heathers, autumn cyclamen, ornamental grasses and evergreen foliage, not forgetting the stunning autumn leaf colour of acers, you can perk up your patio pots with autumn hues that will continue into winter.

“The colour you can get crammed into a pot, or a small collection of pots, at a time of year when some of the days are drab and difficult, can really lift your spirits,” says horticulturist Tom Harris, author of Pots For All Seasons.

“So many plants look great in autumn light, when the light is softer and more diffused and creates quite brilliant effects. To see a profusion of flowers, berries and foliage in pots close to the house in autumn, is quite life enhancing.”

So, which plants should help make a dazzling display in your containers this autumn?

1. Chrysanthemum
Chrysanthemums bridge that gap between late summer, when many annuals have started to look straggly, and autumn, when berried fruits and autumn leaves change the colour palette of the garden.

“They provide such a splash of colour. I wouldn’t mix them with anything else because they go over fairly quickly,” says Harris. “Some of the colours, like the rich russet orange varieties, sum up autumn in one flower.

“I’d plant them as standalone specimens because they don’t sit comfortably with many things. The dwarf varieties form this beautifully rounded cushion so you don’t want anything sitting up against them. They are beacons in their own right. They are fairly short lived, but if you love colour, they deliver that.”

Put them somewhere sheltered where they won’t get too wet, to keep the flowers good for as long as possible, he advises.

2. Cyclamen
The hardy autumn-flowering type, Cyclamen hederifolium, will brighten up any pot, in shades from white to pink and red, adding pops of colour to other autumn evergreens including heucheras. These hardy cyclamens should persist into winter.

Match them with the bud-blooming heather, Calluna vulgaris, which will also last a long time, and pop in bulky ornamental cabbage a little later in the season to fill the pot. 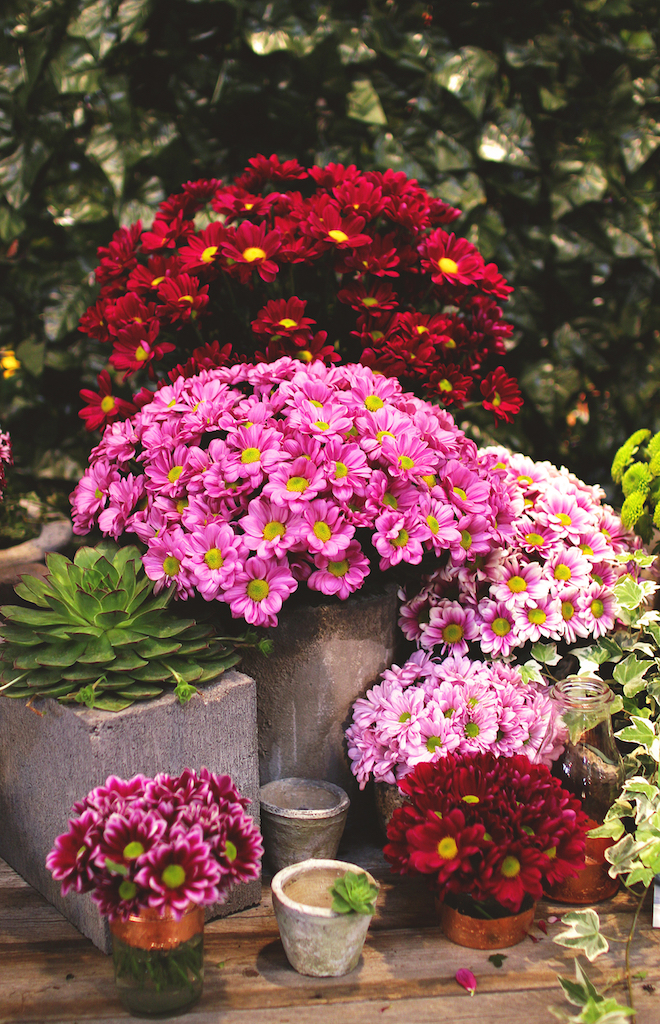 3. Violas
They are a favourite with gardeners, as they come in a huge variety of colours, but Harris suggests placing violas on a table or on a stand where you can see them, not on the ground.

“You get so many flowers with violas if you deadhead regularly. They can go with all sorts of things, but look great as a standalone in a very small pot raised on to a table because you can appreciate the finer detail of them,” he explains. “You can get quite a punch of colour from not many plants.”

4. Heuchera
Perfect for a lightly shaded corner, the value of these evergreen perennials is largely in their foliage, which is stunning, from acid greens to chocolate hues. Harris’ favourites include ‘Marmalade’, with its deep amber foliage, while the dramatic, deeper burgundy hue of ‘Chocolate Ruffles’ contrasts brilliantly with orange hued violas or cool, white-flowered cyclamen.

They also make great standalone specimens and the spikes of tiny flowers they throw up in summer are a magnet for bees. In warmer parts of the country their leaves will remain all year, while in colder spots, they will die back and need tidying up in spring.

5. Heather (Calluna vulgaris)
Bud-blooming heathers, as Calluna vulgaris is known, provide height and feathery structure to any autumn pot, and will last a long time. You can get pink and white varieties that are widely available, along with trailing versions.

6. Skimmia japonica
These impressive evergreen shrubs often form the centrepiece or backbone of autumn and winter container displays, with their deep green evergreen leaves and shiny red berries. If you’ve only room for one, go for the subspecies reevesiana, which is hermaphrodite (self-fertile), so doesn’t require a male and female plant to be placed together for the female to produce berries.

Plants with berries should be available in September and October. Pair them with other evergreens such as Euonymus fortunei ‘Emerald ‘n’ Gold’, and trailing green ivy, Harris suggests.

7. Autumn-flowering crocus
“Autumn-flowering bulbs are often overlooked, but if you tuck autumn-flowering crocus in among other plants they will pop through and you can enjoy them for a couple of weeks,” says Harris. “Colchicums have bigger flowers. You can buy the bulbs in the second half of August and the first half of September, and they should be flowering within weeks.”

Popular autumn-flowering crocuses include Crocus speciosus, a large-flowered scented species. Plant them in your pots now, under other plants, and they should be flowering by October. Support the flowers with plants such as corkscrew rush, or the flowers tend to flop over, Harris advises. They make good plant partners with autumn-flowering gentians such as Gentiana scabra.
(PA)