By Dr Alex Menez
The small group of speakers sat in the conference hall, readied for the second day’s lectures. From the Gibraltar National Museum and the University of Gibraltar, I was the first speaker. We can trace the beginnings of natural history studies to the ancient philosophers, including Thales (c620-625 to c547-546 BCE), Anaximander (c610 to c546 BCE), Hippocrates (c460 to c377 BCE), and Aristotle (384 to 322 BCE).

In Gibraltar, we can begin with Strabo and Mela, from about 60 BCE to 5 BCE, through to Portillo, Ayala, and others, to the present. Drawing on published and unpublished material, I spoke about the rich history of natural history in Gibraltar through the life and works of naturalists John White, Willoughby Verner, and Anthony Wolley-Dod. Learning about, and understanding, the contributions of naturalists from the past provides inspiration to all of us to contribute to the study of natural history in Gibraltar.

Next on was Geraldine Finlayson, who had lectured the previous day about digital photography. Covering an area of 28 hectares, the Gorham’s Cave Complex, Gibraltar’s World Heritage Site, stretches from the sea level caves on the Rock’s east side, to the top of Mediterranean Steps, 426 metres above sea level. The site was inscribed on to UNESCSO’s World Heritage List in 2016. Geraldine noted that the site “provides an exceptional testimony to the occupation, cultural traditions, and material culture of Neanderthal and early modern human populations”. And a window to the past; the “ancient raised beaches, scree slopes, shorelines, and dunes” reminding us of the “dynamic and precarious nature of a costal world that was in a constant state of flux”.

Stewart Finlayson from the Gibraltar National Museum and the University of Gibraltar provided a history of excavations in Gibraltar, focusing on Pleistocene deposits from caves, specifically the avifauna fossil material. Astonishingly, four caves, Gorham’s, Vanguard, Devil’s Tower, and Ibex, have yielded fossils of 161 bird species.

This, “roughly equating to a third of the European avifauna”. Stewart compared the fossil avifauna with that of present-day Gibraltar and the surrounds. He described the range of habitats available during the Late Pleistocene and bird occupation of these, noting “the climatological implications of the presence of particular bird species at specific times in the Late Pleistocene”.

The next speaker was Keith Bensusan, who had lectured the previous day about insects in Gibraltar and the surrounds. His second lecture was centred on bird ringing in Gibraltar. Attaching a ring on a bird’s leg “enables that individual to be identified if captured or found subsequently”.

Originally undertaken by MOD personnel, the technique was employed by local ornithologists from the 1970s; then by GONHS in the 1990s, a bird ringing programme that continues today. The birds are caught in mist nets by trained and certified persons. GONHS operates 18 such nets at its Jew’s Gate Field Centre. Data, such as size, condition, and state of plumage are collected. Keith noted that during the 30 years the programme has been running, 108,268 birds, encompassing 131 species, have been ringed. Adding that the considerable data available “allow us to investigate the journeys that migratory species make”.

In my morning lecture, I had spoken about bird migration, noting that it was one of the most vexed questions of 18thcentury science and philosophy. Gilbert White (this year is his tercentenary), his brother John White, who was in Gibraltar from 1756 to 1772; Carl Linnaeus, Thomas Pennant, and Giovanni Scopoli were among the many naturalists who were obsessed with the subject.

Although we have learnt a great deal about migration since then, an obsession for this fascinating subject continues. Clive Finlayson from the Gibraltar National Museum, University of Toronto, Liverpool John Moores University, and the University of Gibraltar, has studied bird migration since his formative years as a naturalist and has published numerous papers and books on the subject.

Clive’s lecture (one of two related to bird migration in the Strait of Gibraltar, the complementary lecture delivered on the final day of the Conference) concentrated on “flyways, bottlenecks, and stop overs” and terrestrial and aquatic species. Clive explained that ringing had, for many years, provided data regarding the movement and migration of birds. More recently, though, the use of GPS had become prominent, enabling continuous tracking of birds over large areas. A part of his on-going research into this technique required a detailed review of the literature; this almost becoming “overwhelming, with more than 700 published papers over the last few years for Eurasia alone”. Clearly, much has been learnt; but there is still a lot more to discover and understand. Scale and interconnectedness are important as components of this, Clive noting that “the Strait of Gibraltar falls within a broad stop over region for passerines, that encompasses large areas of north-west Africa and Iberia in particular”. 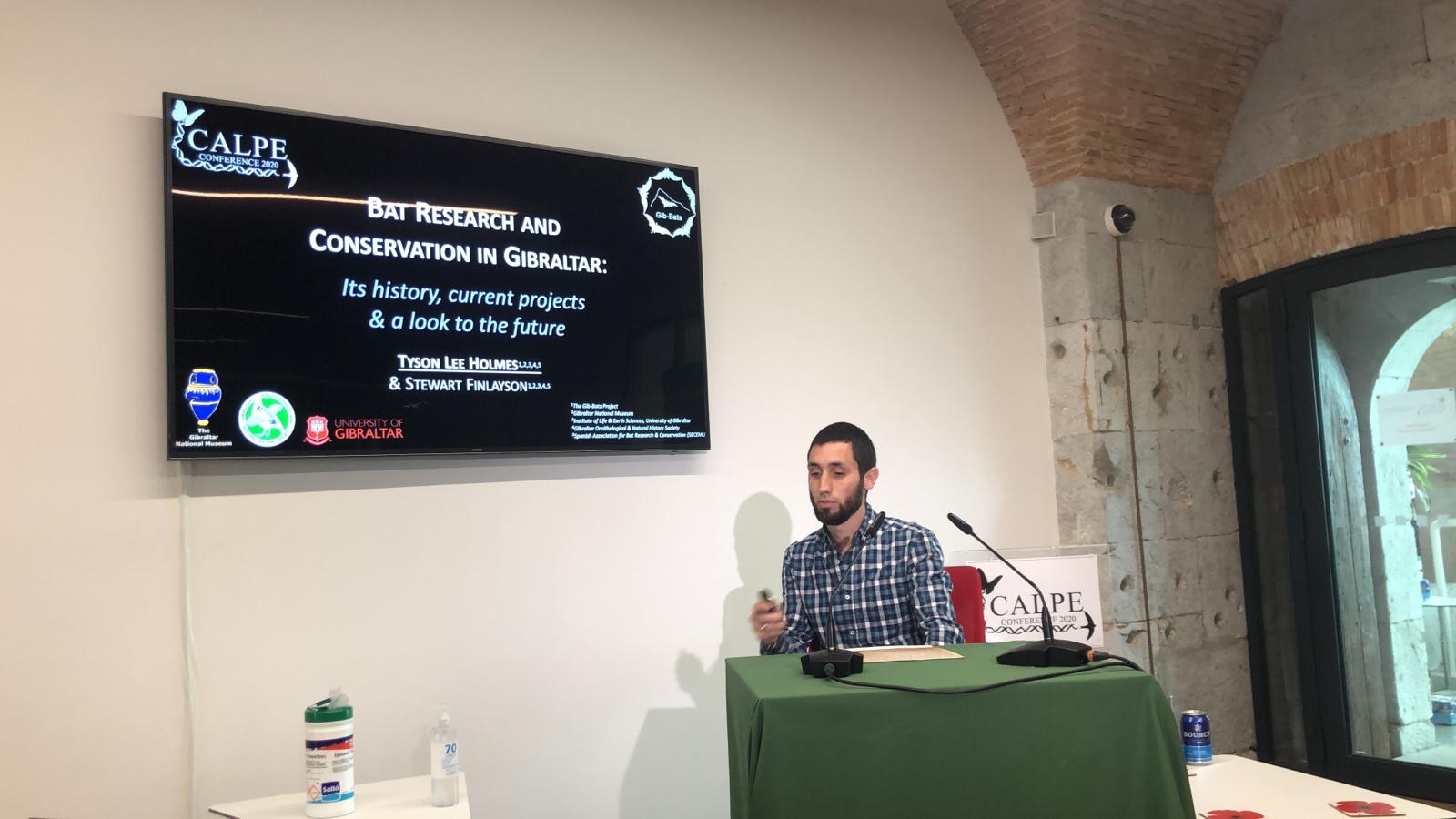 The final day’s lecture moved from birds to bats. Tyson Lee Holmes, from The Gib-Bats Project, the Gibraltar National Museum, and the University of Gibraltar, said that “Riddled with over 200 recorded natural caves and 55 kilometres of tunnels, the Rock of Gibraltar presents the perfect roosting habitat for bats. Or at least it once did”. Tyson provided a history of bat research in Gibraltar, noting that the first bat census, dating from the 1960s-70s “account for over 36,000 bats”. Although the census was “not scientific in nature”, it hints at a decrease of 97% of bats since the 1960s-70s, especially when data from GONHS in the 1970s and from visiting UK specialists in the 1980s-90s are considered.

The Gib-Bats Project was set up in 2013 as a collaborative study to “identify all bat species found on the Rock as well as their roosts and feeding grounds in order to better understand their ecology, with the ultimate aim of developing a national conservation strategy for bats”. So far, findings have shown that “up to seven different species currently occur in Gibraltar”, some newly recorded for the Rock. Others, sadly, have become locally extinct. Tyson discussed current research in Gibraltar and the surrounds, and conservation issues. The second day finished with an informative, and topical, short film that Tyson screened at the end of his lecture titled “Bats and Covid-19”.

Part three of this series will be published in Thursday’s edition.