By Martí Crespo, journalist and author of Gibraltar.cat. Translated by Brian Porro.

Two cities are of enormous significance in the life of the painter Gustavo Bacarisas Podesta (1872-1971). One is Gibraltar, where he was born on 23 September 1872, and the other is Seville, where he died almost a century later, on 7 January 1971. In addition to being the place where he grew up and spent his early years and where his family lived throughout all his life, the Rock was also a place of refuge for him during periods of difficulties and conflict (during the Spanish Civil War and the Second World War) in his life. On the other hand, Seville, the Andalusian capital, where he settled from 1913 after a long educational journey that had taken him to Rome, Paris, London and even America, undoubtedly represented the high point and culmination of his artistic career. 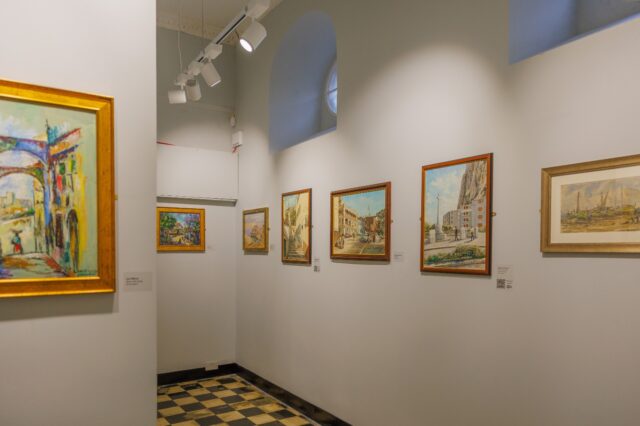 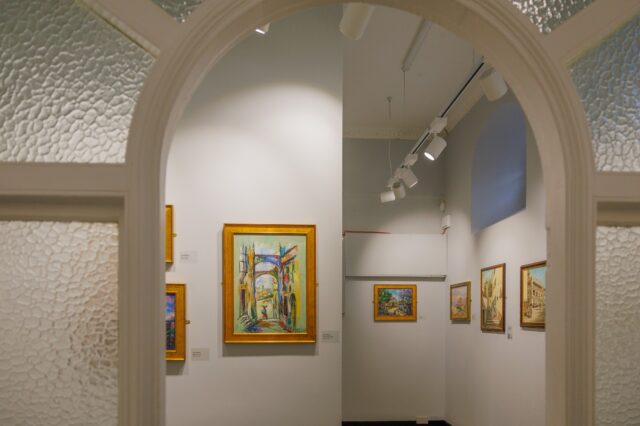 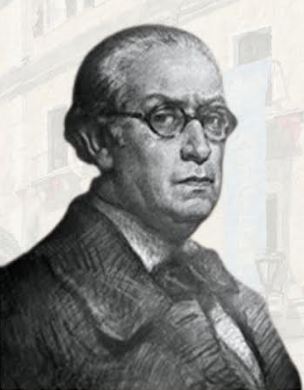 It is with good reason that, long before Sir Joshua Hassan appointed him honorary Freeman of Gibraltar in 1961 and first Freeman of the City in 1962, the municipal authority of Seville had already granted him the title of adoptive son in 1919. But in the geography of Bacarisas’ life, there is one more part of the world which could still be included, and which appears in every biography of the artist but that invariably does not go beyond a mention with no further details: his Menorcan roots.

In this regard, the first paragraph of the complete biography that professor and painter Manuel Castro Luna published in 2005 on the most outstanding painter of Gibraltar is a typical example and very illustrative: ‘The Bacarisas family, according to Don Federico Sacarello, a Gibraltarian and a personal friend of Don Gustavo, is of Balearic descent, as confirmed in all the descriptions of the painter, some at public events where he has been present.’ As a contribution to the 150th anniversary of the birth of Bacarisas, I will try in this article to expand the brief mentions of the Menorcan origin of his family on his father’s side and provide more details based on research in the parish records, the church archives, the civil registries and the censuses available in Gibraltar.

According to the Baptismal Books of the Cathedral of St Mary the Crowned, for example, Gustavus Carolus Bacarisas was born on 23 September 1872 to Gabriel Bacarisas and Adelina Podesta, a married couple and both, like him, Gibraltarians. But, as the parents’ surnames already suggest, their origins must be sought on the other side of the Mediterranean.

His mother’s family came from the Republic of Genoa, one of the places that contributed the most to the population of Gibraltar after it passed into British hands under the Treaty of Utrecht in 1713. On the other hand, his father’s family came from Menorca which, although in a smaller proportion, also contributed to the remarkable migration of people coming to work on the Rock between the mid-18th Century and the first thirty years of the 19th Century, coinciding with the period in which the island of Menorca was intermittently under British rule.

Gabriel Bacarisas was, in fact, the son of a Menorcan, as recorded in those same Gibraltarian church archives: on 19 August 1827, he was baptised ‘Gabriel Ignacio Vacarisa’ [sic], legitimate son of Gabriel Vacarisa, a native of Mahón, and Francisca Jurado, a native of Málaga.’ Gustavo’s Menorcan grandfather died young, according to the burial records of the same archive: on 5 July 1836, the priest Juan Rosado wrote that ‘Gabriel Vacarisa died yesterday of gangrene, a native of Mahón, aged 43, married to María Jurado [sic], a native of Malaga.’ From the age given and the date of death, we can calculate that he was born in the area of the Menorcan capital around 1793, precisely between the second and the third-and-last British period on the island.

Gustavo’s grandfather, then, was one of the many inhabitants of the area around the entrance to the port of Maó who emigrated to Gibraltar more than two centuries ago. In fact, among the hundreds of Menorcans who went there we find a good handful of Vacarisses, registered in the local records under every conceivable spelling: in the 18th Century, at least one Esteve Vacarisas (1746) from the suburb of San Felipe is mentioned, as well as the Menorcan shoemaker Francesc Vacarisas (1791); and between 1810 and 1836, in the parish records the references rise dramatically with a good handful of Bacarisas, Bacarisa, Bacarizas, Baquerizas, Vacarissa and Vacarisas, all of them linked to Maó (or Mahon).

Unfortunately, it has not been possible to establish the date of Gabriel Bacarisas’s arrival at the Rock from the censuses of the first part of the 19th Century, but they do provide valuable information about his son Gabriel, Gustavo’s father. Thus, in the 1868 census we are told that he lived in Governor’s Parade with his mother Francisca Bacarias [sic], aged 65. In 1871 the census provides the detail that he was a ‘trader’ by occupation and that he lived at 14 Castle Road with his wife Adelaide, seventeen years his junior. And in 1881, both Gabriel Bacarisas, described as a ‘clerk’, and his wife had moved to live in Upper Castle Road and had already had four children: Gustavus Charles (age 8), Francis Joseph (age 6); Albert Michael (5) and Horatio Emanuel (1). Ten years later, in the 1891 census, the father was already a ‘general commercial agent’ and the whole family had moved to 1 George’s Lane, much closer to the main thoroughfare of the city, Main Street. 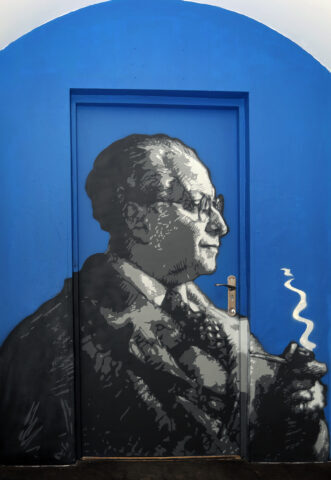 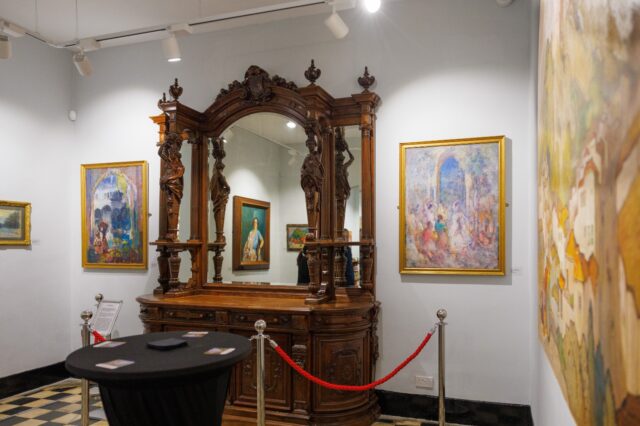 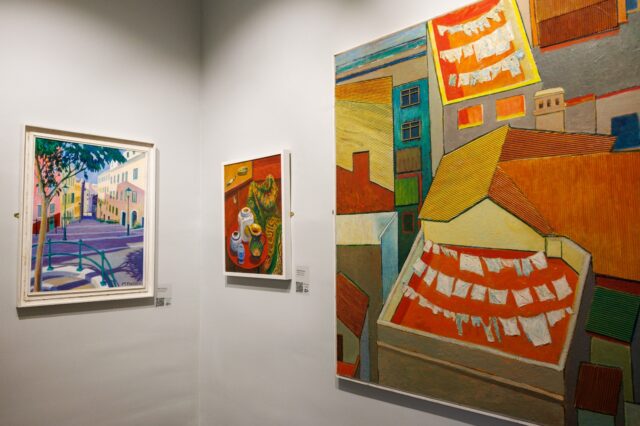 Of the four children, in 1891, only Gustavo – 18 years old – was listed as an employee (English teacher). But as we all know, his life was about to take a radical turn: the following year, thanks to the drive and good eye of his father – himself an amateur painter – he obtained a scholarship sponsored by a group of local merchants and industrialists to carry out a long period of residential art training in Rome.

For this reason, in the 1901 census, there is no trace of him in the family group. And in 1911, two years before our painter fell madly in love with Seville, the records show that his father had already died and that Adela Bacarisa [sic], aged 65, had moved to an even more centrally located house, at 7 Horse Barrack Lane, with the three remaining children: Francis, who was already a ‘consular’s clerk’; Albert, owner of the Cecil Hotel; and Horatio, clerk at the time and future British Vice Consul in Madeira during World War II.

After this family journey through the ecclesiastical and civil records, it is curious to note that, despite the fact that his younger brothers held jobs and positions that were important enough in Gibraltarian society, Gustavo Bacarisas – the only one who had left home and Gibraltar at the young age of 19 – would end up being the most remembered of all and the most recognised at both institutional and popular level. Indeed, in Gibraltar, for a number of years now, there has been an art gallery with his name in Grand Casemates Square, not far from a block of flats that decades ago was given the name of Gustavo Bacarisas House.

Many of his paintings can also be found hanging in public buildings and museums in the city, as well as some colourful exterior murals painted in the small streets of the town centre, inspired by some of his paintings. Bacarisas will now be further commemorated, on the 150th anniversary of his birthday, with the publication of a children’s book about the most outstanding episodes of his long and prolific life, by the local artist Shane Dalmedo, to be followed shortly with the issue of a set of commemorative stamps.