Three nights in Tavira – alongside a famous actor

A view from the rooftop bar.

It took us just over four hours to drive from Gibraltar to the picturesque town of Tavira— which is the first town you’ll get to on the Algarve once you cross the border from Spain.

Our plan was to soak up the sun on Tavira Island’s beaches during the day and gorge ourselves in some of the town’s fancy restaurants at night.

But alas it wasn’t to be as our three-night stay also coincided with a few torrential downpours, meaning we had to come up with a “Plan B.”

First things first, after checking into our hotel armed with only summer attire, we nipped out to buy some rain coats before setting off to explore the cobbled streets of this historic town.

The good news is that there are a few things to keep you busy in Tavira, even if the sun isn’t shining!

For those who have not visited before, the town is set on either side of the River Gilao, which is linked by a rather picturesque “Roman Bridge” and overlooked by the ruins of a handsome Moorish castle.

An interesting bridge-related fact is that the Roman Bridge is so called as it was built over the remains of an earlier third century Roman bridge. The present bridge only dates from 1663!

Later that evening, we ventured out in our hastily acquired rain coats to a fantastic little restaurant called Ti Maria.

It’s a little off the beaten track and you won’t find it walking around the centre, but it has a fantastic menu and is very cosy inside.

We had octopus tempura, tuna tartare and fried goat’s cheese parcels — at just over 40 euros for the two of us. 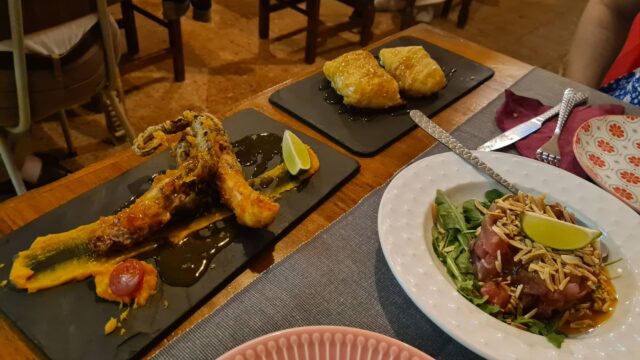 One of the highlights of our break was catching the tourist train, which cost a rather reasonable five euros each for an hour-long mystery circuit around the town.

It was bumpy, there was no map or audio guide explaining where we were going, what we were looking at or where we should get off — but it was a surprisingly enjoyable ride. 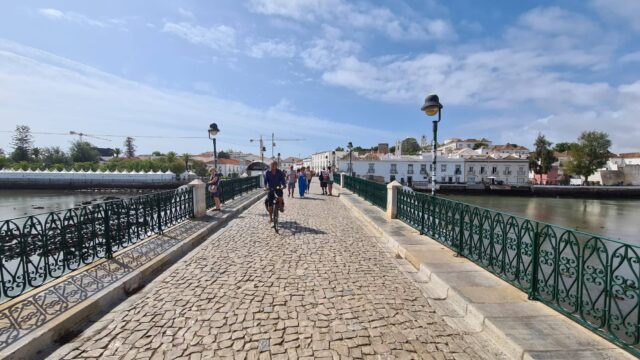 And as with any tourist train, it did show us the layout of the town and some areas to explore on foot — most notably the salt flats and the ferry point at Quatro Aguas, where a small passenger ferry takes you to Tavira Island.

The salt flats were worth a look and we saw a digger attempting to put several tonnes of salt into a pick up truck, whilst pink flamingoes pottered around in the water.

The following morning we woke up to blue skies so hurried out and re-traced the tourist train’s route to the ferry terminal.

We paid euro 1.70 for a return ticket to Tavira Island — a journey that took just under ten minutes. 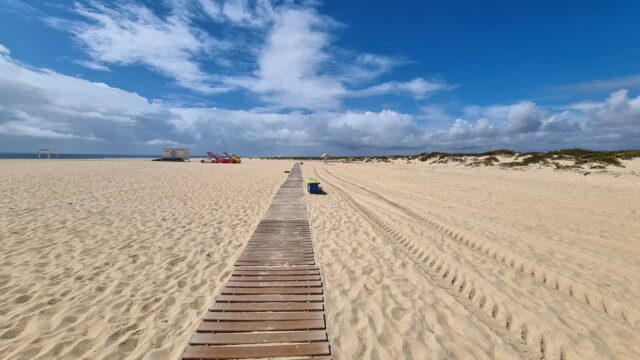 The island is home to unspoilt beaches, several beach bars, a campsite and a few sugar cube-style holiday homes — and surprisingly, there are no roads or cars here.

In the height of summer, you can spend a whole day on the island enjoying the summer vibes and sunning yourself on the beach.

However, after a short walk and a beer we saw some dark clouds approaching and having been caught out by the rain the night before, we made a tactical retreat back to the mainland.

That evening we ate at Come na Gaveta (second best restaurant in Tavira according to Trip Advisor), which had a queue several people deep on arrival.

Make sure you book in advance as we did, as you have no chance of getting in without a reservation.

We recommend the tuna tacos, pork steak on a heated stone and octopus tempura, and it does a mean Expresso Martini.

With the rain on hold, we headed off to the well-preserved ruins of the castle, which are said to date back to the 12th century.

It’s free to enter, but there are no signs explaining anything about its history so you walk around rather oblivious to what’s going on.

That said, the gardens within the castle walls are well-maintained and the views from the top of the castle are worth climbing up for.

There is a legend that on the night of Midsummer’s Day the long-lost daughter of the Moorish Castle Governor is heard to cry out in the darkness.

We didn’t hear that, but there was an audible cry from staff to announce that the castle was closing that evening.

For our three-night trip we stayed at the Colegio Charm House, which opened for the first time last summer.

A former Catholic college for boys and before that, a palace dating back to the mid-18th century, it has been lovingly restored and is now a boutique hotel that features 19 rooms.

When we checked into the hotel on the first day we noticed another guest that bore a passing resemblance to the Canadian actor Keanu Reeves. It turns out that it was indeed Mr Reeves and he had been staying at the hotel for a few days. 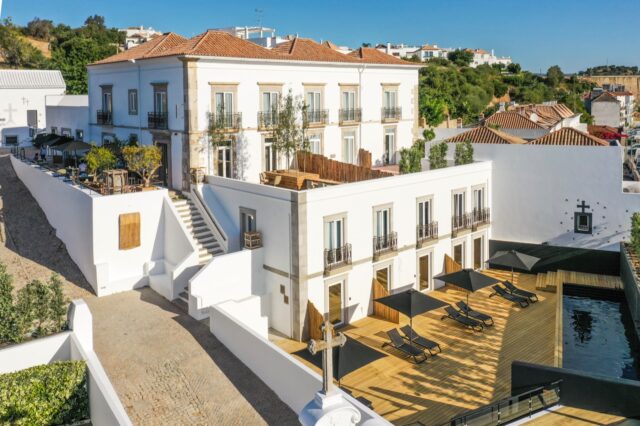 It’s worth popping up to the hotel’s roof top bar, where we enjoyed a gin and tonic whilst soaking up the views of the old town.

As for the breakfast, which is included in the booking, it was another highlight of the trip, with multiple courses brought out to us.

Staff were attentive and, perhaps because it is a family business, it felt more like we were staying in someone’s home.

There is no doubt that Tavira is best visited in the height of summer, but there is still plenty to see here out of season — and you never know, you might bump into someone famous!

The writer of this article received a discounted rate from El Colegio Charmhouse during his stay at Tavira.