A £2m investment for the construction of new accommodation for Ministry of Defence service personnel, their friends and families has commenced.

The 18-apartment development is located adjacent to Four Corners on Winston Churchill Avenue, the site of the old bus depot.

Although it is not an MoD project the Commander of British Forces Gibraltar, Commodore Tim Henry welcomed some dignitaries and the press to the site on Friday.

The accommodation is being constructed by GJBS under the project management of ASK Management and being funded by the Gibraltar Naval Trust (GNT).

Each apartment will have disabled access, air conditioning and all other expected mod cons.

The accommodation is for service personnel to rent out for short term periods when they have family or friends visiting. It will also be used by veterans and visiting military sporting teams.

“The Gibraltar Naval Trust started in 1940 and was all about helping service men and their families here in Gibraltar,” he said.

“Over time it has ended up being a place where single personnel or personnel who are based here short term or long term and those attached to the MoD can rent an apartment at very reasonable prices to bring their families out or to have a little more space.”

The project is due to be completed in the summer of 2020.

At present the service accommodation is at Buena Vista Heights in the south district.

“It is going to look really, really smart and a modern addition here at the airport,” said Commodore Henry.

“All entitled personnel are urged to make use of the high quality value accommodation on offer,” he added.

David Muskett from ASK Management revelled in the fact that this project is a little different to what he is used to working on.

“I have to say on behalf of ASK it has been a real honour, an honour to work with people from the military, the trustees and working with GJBS, it is a pleasure to work with them,” he said. 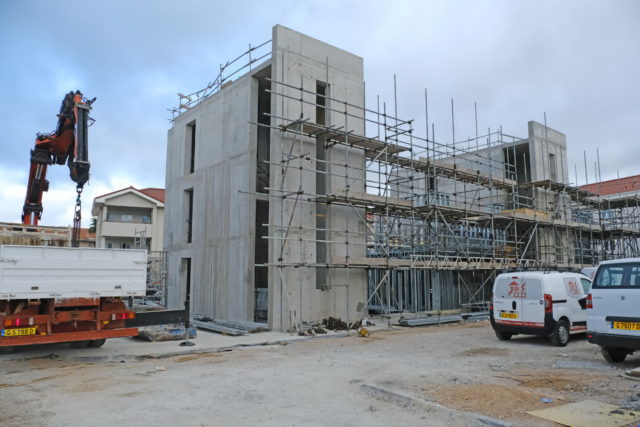 The construction is not without the challenges building on the Rock brings but in addition due to the proximity to the runway issues like foreign object debris is high on the safety list for the company.

ASK Management company is no stranger to building on the Rock and has worked on various projects over the year.

“But this This is top of the list because of what it is,” he said.

“As I was saying to a colleague a few moments ago normally we have a client - a developer and the client’s client – the purchaser, this way we see it we have the clients [the GNT] and then there are many many clients we will never see or ever have the honour of meeting them but for the next 30 – 40 years they are going to be enjoying something we have had a hand in,” he said.

“That makes us quite humble to be honest,” he added.

He spoke about the various meetings that had to be held where discussions on aesthetics and utilisation of space were just a few of the points being considered by all.

“We have an excellent mix of luxury apartments within in a very tight budget,” he said.