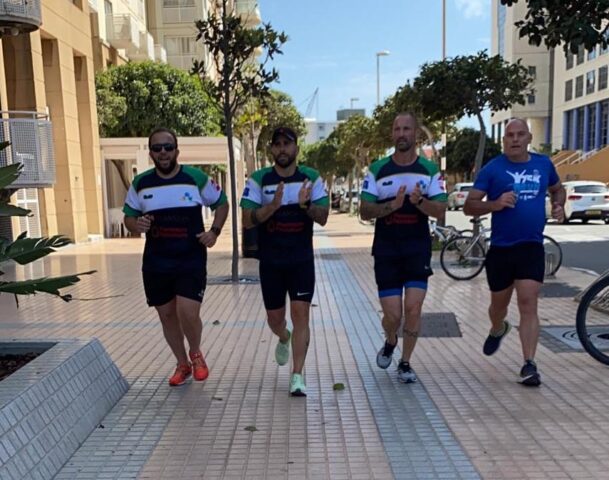 The event was organised by members of the local running club Carpe Diem and started at 5pm on Friday evening until 5pm on Saturday. 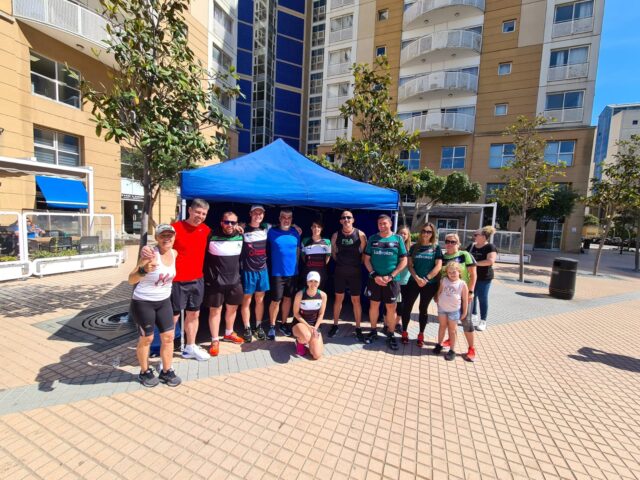 While some runners came and did their part, a minimum of 30minutes running, others took it to what could only be described as the extreme.

Ultramarathoner Lisa Olivera, club member and one of the event organisers, ran 74km in the 24 hours. Running through the night by doing a 10km at 1am or 12km at 6am for example. 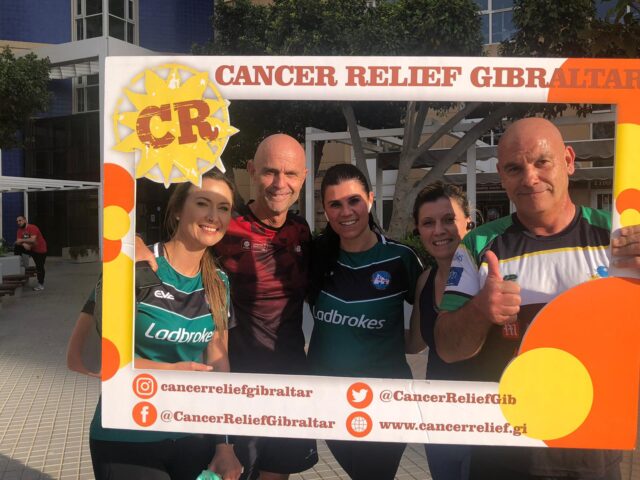 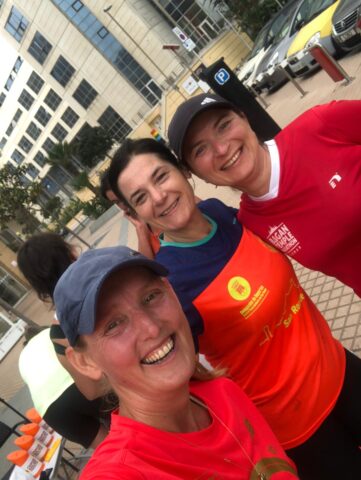 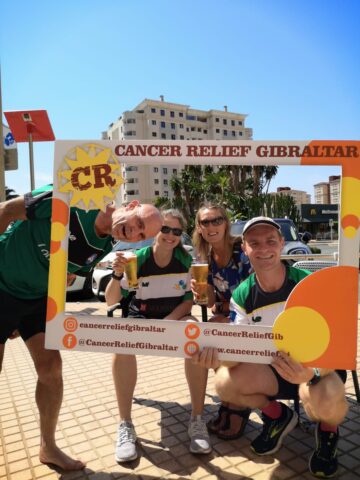 Never sleeping, instead she would rest the best she could in a gazebo provided by the RGP on the footpath by Time Out who supplied the runners with electricity so they could keep essential items such as their phones and garmins or smart watches that would log those precious kms charged.

Speaking to the Chronicle after the event a tired but elated Mrs Olivera said: “I can honestly say I have reached my happy place. I’d like to think that when I leave this body that I haven’t wasted a single moment.”

“That’s why I feel drawn towards setting myself challenges both physically and mentally. I need to push the boundaries that society places upon us.” 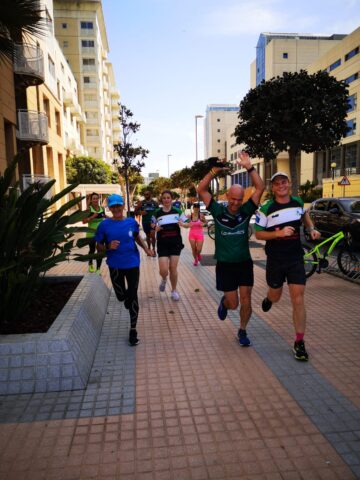 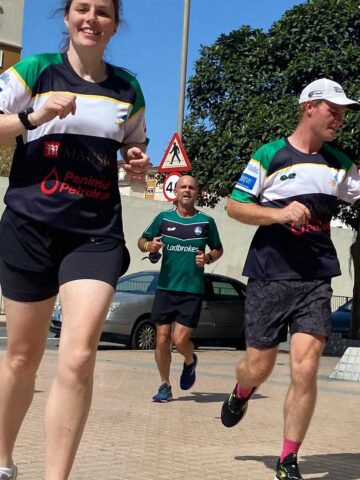 She was not the only one who pushed their boundaries fellow club member and event organiser Stefan Davis ran 60km over the period, including a half marathon shortly after midnight. Mr Davis recently turned 60 and felt the number was a good one to aim for. As if to prove age is just a number he also participated in the GAAA 5km race the following morning.

“This weekend’s 24 hour charity run was organised with relative short notice. Many runners from the local community turned out and it was a massive success both in amount raised from the runners themselves and from local business,” he said.

“Amazing to see the support and also many runners of all ages, abilities and various clubs and not to forget Gino Jimenez aged nine who ran 3km with me in the silent hours.”

Two other club members Charlotte Ward and Emma Foy also ran over 60km in the 24 hours.

“Just over a full marathon of 43km on 7.30pm Friday and some people joined us along the way, one person did a half with us,” said Ms Foy.

“We finished at about 1am in the morning, went home got some sleep and went back out and did 16kms and then ended up doing a few more kms at the end with some stragglers who were finishing up.”

She did it because she could and she wanted to and only regrets it slightly as she stood on tired legs.

“It was great camaraderie it was really good to raise some funds for charity. Everyone was beeping their horns and waving as we went past,” she said.

“I did it to support the 5in5 crew for a cause that’s has affected most if not all of Gibraltar in some ways. I felt tired as I only managed to sleep two hours total not allowing me to recover between my seven runs, but seeing how many people came to support and run, it got us through it with smiles and laughter all the way through,” he said.

“We’re lucky to live in Gibraltar where everyone comes together whenever there is help needed.”

“What the guys are doing with the 5in5 challenge is incredibly inspiring while they help two great charities and also motivating people for a healthier lifestyle.”

Mr Walker was not the only Lourdians runner taking part another well-known and respected runner Horace Bossano who in the very early hours of Saturday morning joined some of the runners on their run.

Some of these runners were Carpe Diem members Elliot Johnson and Colin Thompson who both set off at 2.30am and completed a marathon, a distance of 42.2km. Mr Johnson did not stop there though he also ran 5km on three other occasions during the 24 hours. In addition, on Sunday he took part in the GAAA race and an around the Rock cycle for mental health.

Organiser Tamara Viagas called the event a success and fun.

“The 24 hours run started just as an idea that I mentioned to Elliot as I had one in my teenage years and it was really good fun,” she said.

“And then the rest is history.”

Staying through the night alongside some of her more hardcore runners she said: “It was so much fun. And night time was like a camping trip having tea and drinks with Lisa and Stefan.”

“I think it went swimmingly and well received. A lot of positive feedback from other club members and the community,” she said. 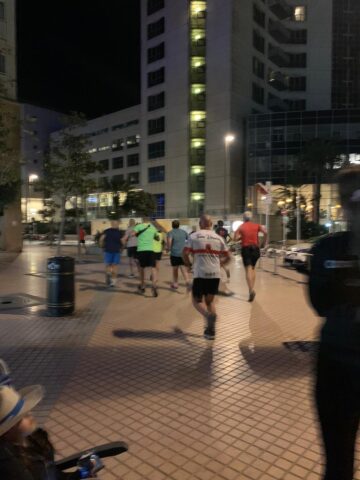 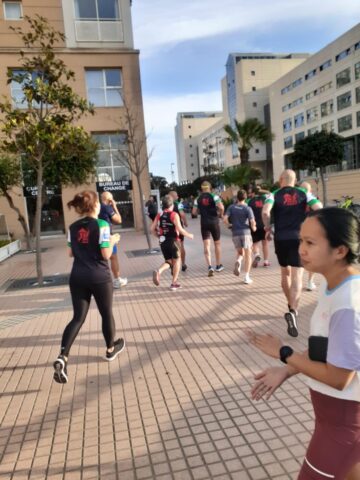 Noting that some business within the community also supported the event, such as Eroski who provided drinks and snacks, Gibmaroc supplied fruit and Europort management allowed them to erect the gazebo. She said all of these things including the help and support from Time Out Café and the RGP made the event possible.

The 5in5 challenge will see three athletes, Adrian Lopez, Kieron Alvarez, Carpe Diem member Charles Harrison complete five half ironmans in five days. They will start on May 18. The men are raising money for the Cancer Relief Centre Gibraltar and Cardiac Rehab Gibraltar. A half ironman consists of 1.9km swim, 90km cycle and 21.1km run. They will be supported by members from each of the three sports on the Rock during each part of their challenge.

These three men all ran over 50km during the 24hour run.

“As we reflect on this weekend, we can’t take credit for such a special and well run event,” said a 5in5 spokesman.

“We thank Carpe Diem members for taking their time to sort this out for us, especially Tamara, Lisa, Stefan and Elliot who were instrumental in putting it all together. We contacted them for some support during the event [5in5 challenge] as we hoped they would join us for part of the run, but we didn’t expect this.”

“We knew with a week to go we had to give it one last push, we each managed 50km run which we are extremely happy with,” they added.